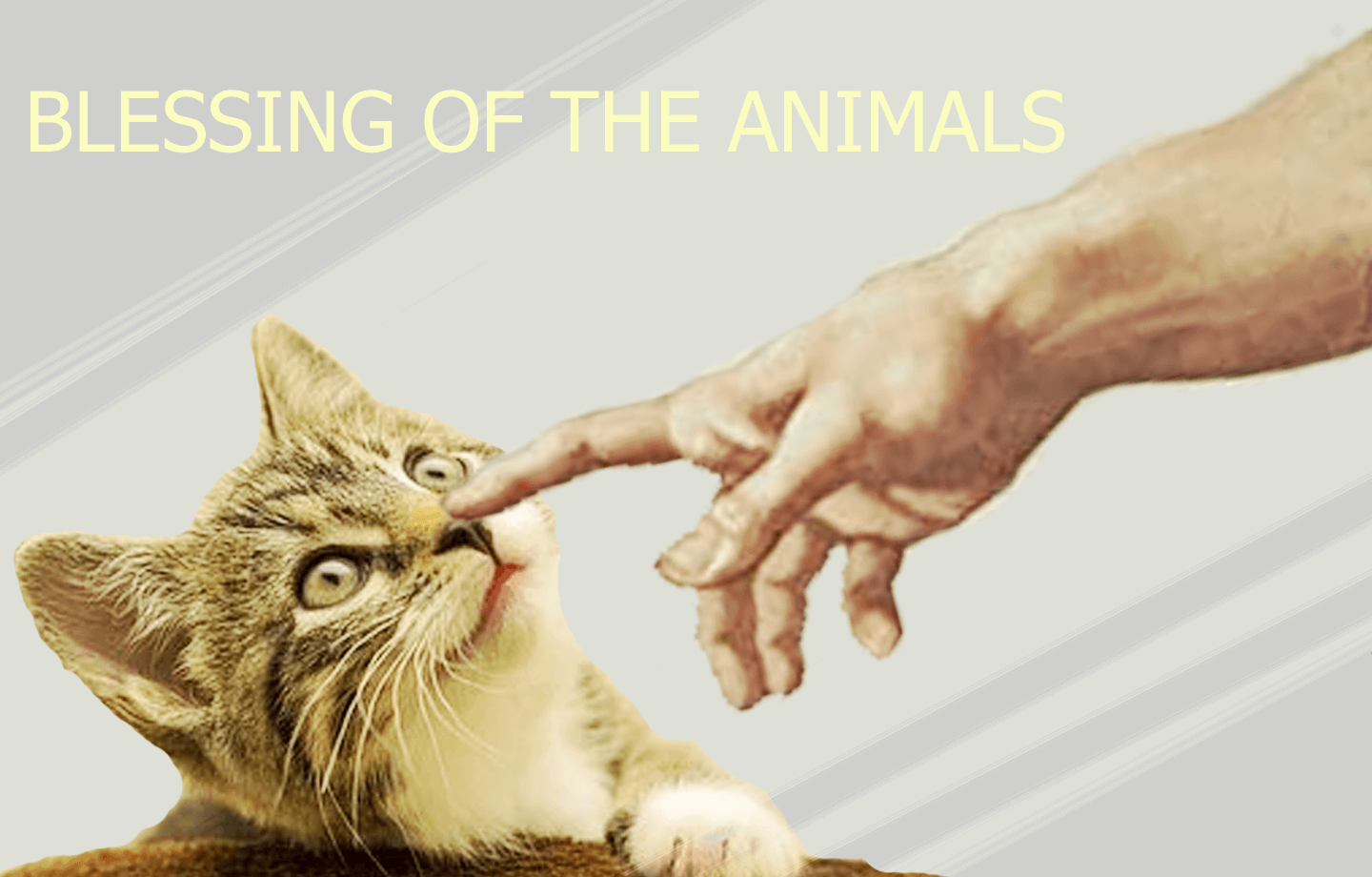 Join us in person or via Zoom for our annual Blessing of the Animals ceremony. You are invited to bring your pets so they can receive a blessing (please ensure they are on a leash or in a carrier). If your animal companions have crossed over the rainbow bridge, please bring their photo so we can honor their memory. Rev. Dr. María Cristina Vlassidis Burgoa will be preaching.

We require masks in all buildings. We encourage all in person participants to be vaccinated. Read more about our In Person Guidelines here.

Religious Education for children and youth happens during worship on Sundays. Children and youth arrive in the Sanctuary for the just a little bit and welcome in Sunday with a story and song. Then, they attend their own programs in the Education building. Learn more here!

God got a dog
She never meant to.
She liked dogs, She’d
liked them ever since She was a kid,
but She didn’t think She had time for a dog now.
She was always working
and dogs needed so much attention.
God didn’t know if She
could take being needed by one more thing.
But She saw this dog
out by the tracks
and it was hungry
and cold and lonely
and God realized
She’d made that dog.
Somehow She was responsible
even though She knew logically
that She had only set the world on its course, and
She couldn’t be blamed
for everything.
But She saw this dog
and She felt bad
so She took it on home
and named it Ernie
and now God …
has somebody keeping her feet warm at night. By Cynthia Rylant

Today we honor and celebrate our animal companions. We give thanks for their presence in our lives, for their keen ability to show compassion and unconditional love when we most need it. For their quirkiness, funny ways of being and how they can teach us lessons and remind us to be humble, not to hold grudges, and enjoy life with a simple piece of string, an old toy, or a crunchy lettuce leaf.

Our seventh Principle reminds us that we are all interconnected, that beyond individualism, there is a bigger WE, that we are part of the great web of existence. This great web, the spirit of life, the ground of all being, makes us all one with all our relatives.
Indigenous peoples’ relationships with animals are the result of tens of thousands of years of connections to their environments.

In Native American traditions, animals are sometimes used to communicate the values and spiritual beliefs of Native communities. Animals’ importance is also evident in the creation stories of many tribes. Animal imagery is often used to share family, clan, and personal stories.

Clan and kinship systems within many American Indian tribal communities reflect relationships to animals. Each animal carries history and meaning. The story of American Indians in the Western Hemisphere is intricately intertwined with places and environments. Indigenous Peoples strive to be respectful of their environments. To respect Native Americans and animal life, we encourage everyone to work to support your local environments through advocating for the people, animals, and their natural habitats.

Without a doubt, animals are a huge part of Native culture. They are considered our relatives, among our winged, four-legged and swimming family members. They are part of our creation stories, they are messengers to the ancestors and the Creator, and they are our teachers on this world.

In the Pacific Northwest the salmon and orca whales have great significance. The people consider them their relatives. They are sacred. They have stories to tell and medicine to share. They deserve protection. They are our relatives too. The Snake River used to run wild through Washington state, Oregon, Idaho and Wyoming. Adult salmon would freely swim upstream to their spawning grounds and over 50,000 Chinook salmon would spawn in the Spring and Summer. Then the dams were built between 1957 and 1975 making the salmon struggle to pass through eight dams in order to migrate and reproduce. According to the Department of Fish and Wildlife, each time the salmon tries to pass through each dam, their chance for survival is reduced by 10%. This has caused the Chinook salmon population in the Columbia river basin to shrink significantly. The salmon is not only an important economic and nutritional resource, it is also an essential part of the tribes’ cultural and spiritual landscape.

Kat Brigham, the chairwoman of the board of trustees for the Confederated Tribes of the Umatilla Indian Reservation, said that “Getting together and rebuilding our salmon for our children’s children is something that we need to do because salmon recovery is important to the survival of the Columbia River basin as a whole,” Thirteen species of salmon and steelhead trout are listed as threatened or endangered in the Columbia River basin, an area that includes parts of Idaho, Oregon, Washington, Montana and British Columbia.

The salmon are critical to the ecosystem of the river basin, serving as a food source for animals as large as bears and as small as insects. They contribute to the survival of endangered orcas, which depend on eating Chinook in the winter and spring.
The Snake River dams are federally owned. They are managed by the U.S. Army Corps of Engineers, which denied tribes’ request to remove the dams in 2020. Federal agencies have violated laws meant to protect the environment, endangered species and tribal sovereignty. The Army Corps of Engineers’ refuses to even consider the tribes’ request to remove the dams from the lower Snake River.

Tribes and other salmon defenders have not given up their fight. They say the dams can be replaced with other energy sources, including wind power. Fifteen tribes from the Columbia River basin entered into legally binding treaties with the United States in the mid-19th century. Those treaties reserved sovereign and inherent rights, including the right to fish at traditional locations, on and off reservation lands, and to protect fish at those locations.

The tribes have long called for the federal government and political leaders to honor their treaty rights by removing the four lower Snake River dams. The federal government has been sued five times over its failed attempts to save salmon in the Columbia River basin, and for violating long standing treaties with the Nez Perce, Yakama and Umatilla tribes. But now the Biden administration and others say that restoring the salmon population is an issue of tribal justice, as well as the only real solution. “Unless swift, leading actions are taken, a lot of these fish are doomed for extinction,” said Samuel Penney, the chairman of the Nez Perce.

Tokitae or Toki is an Orca Whale who was stolen from her family pod in the Salish Sea in 1970, in a horrific attack that left four whales dead and seven captured and sold off. She was 4 years old. She was sold to the Miami Seaquarium, where she has lived in captivity for 52 years, forced to perform for crowds. Originally, she had a mating partner there, an Orca called Hugo, who lasted for ten years before succumbing to his depression, which had caused him to engage in dangerous behaviors like repeatedly hitting his head against the walls of his enclosure, which sadly led to his death of a brain aneurysm in 1980.

Tokitei now lives in a 20-foot-deep and 35-foot-wide concrete pool, which she shares with a few dolphins who have been known to attack her. She is 21-feet-long. She has been kept prisoner for over 50 years in the equivalent of a bathtub. Her pool is too shallow, which has led to her skin cracking and burning due to sun exposure. Her teeth have been drilled. Trainers have failed to create a meaningful relationship with her. And worst of all, her artificial environment is extremely distressing and causes her to exhibit psychosis. Marine biologist Ken Balcomb has proposed a “Comprehensive Retirement Plan” for Tokitei, which could safely and easily ensure her transition to her home near Greater Puget Sound. Balcomb’s plan was published in 1995, and remains a solid course of freedom for this beautiful creature. Toki would be kept in a secluded cove, near where her pod still lives, including her mother, Ocean Sun, who is in her 90’s. She would be kept in an area much larger than what she is imprisoned in currently, but netted off, allowing her to get used to natural life again on her terms. She would be able to communicate with her pod once again. When ready, she would be released to live out the rest of her days in total freedom.

Today we pray that it’s not too late to join in solidarity with the people who are working hard to free Toki, named the loneliest orca in the world, as well as a miracle.
All creatures, great and small, have stories to tell…if we only listen…and we can learn even from fictional creatures like the characters in A.A. Milne’s timeless classic written in 1926 for his son Christopher Robin: The adventures of Winnie-the-Pooh. Benjamin Hoff, author of The Tao of Pooh writes:
“Within each of us there is an Owl, a Rabbit, an Eeyore, and a Pooh. For too long, we have chosen the way of Owl and Rabbit. Now, like Eeyore, we complain about the results. But that accomplishes nothing. If we are smart, we will choose the way of Pooh. As if from far away, it calls to us with the voice of a child’s mind. It may be hard to hear at times, but it is important just the same, because without it, we will never find our way through the forest.”

From Pooh:
“People say nothing is impossible, but I do nothing every day.”
“A day without a friend is like a pot without a single drop of honey left inside.”
“It is more fun to talk with someone who doesn’t use long, difficult words but rather short, easy words like, ‘What about lunch?’
“Love is taking a few steps backward, maybe even more to give way to the happiness of the person you love.”
“If you live to be a hundred, I hope I live to be a hundred minus one day, so that I never have to live a day without you.”
“‘We’ll be friends forever, won’t we, Pooh?’ asked Piglet. ‘Even longer’, Pooh answered.”
“If there ever comes a day when we can’t be together, keep me in your heart, I’ll stay there forever.”—Winnie the Pooh
“Piglet sidled up to Pooh from behind. ‘Pooh!’ he whispered ‘Yes, Piglet?’, ‘Nothing,’ said Piglet, taking Pooh ‘s paw. ‘I just wanted to be sure of you’.” Another famous conversation between them goes: “‘How do you spell love,’ asked Piglet. ‘You don’t spell it…you feel it,’ said Pooh.”

Friends, whether we learn from Native American people to cherish our connection to all our relatives, the four legged, the winged ones, the ones struggling to go upstream, the ones longing to swim free, or whether we learn about friendship and love by reading Winnie the Pooh, the message is the same: There is wisdom, healing, humor, and joy to be experienced in relationship with all our relatives. We are all interconnected. We are all part of the web of existence. We are one.