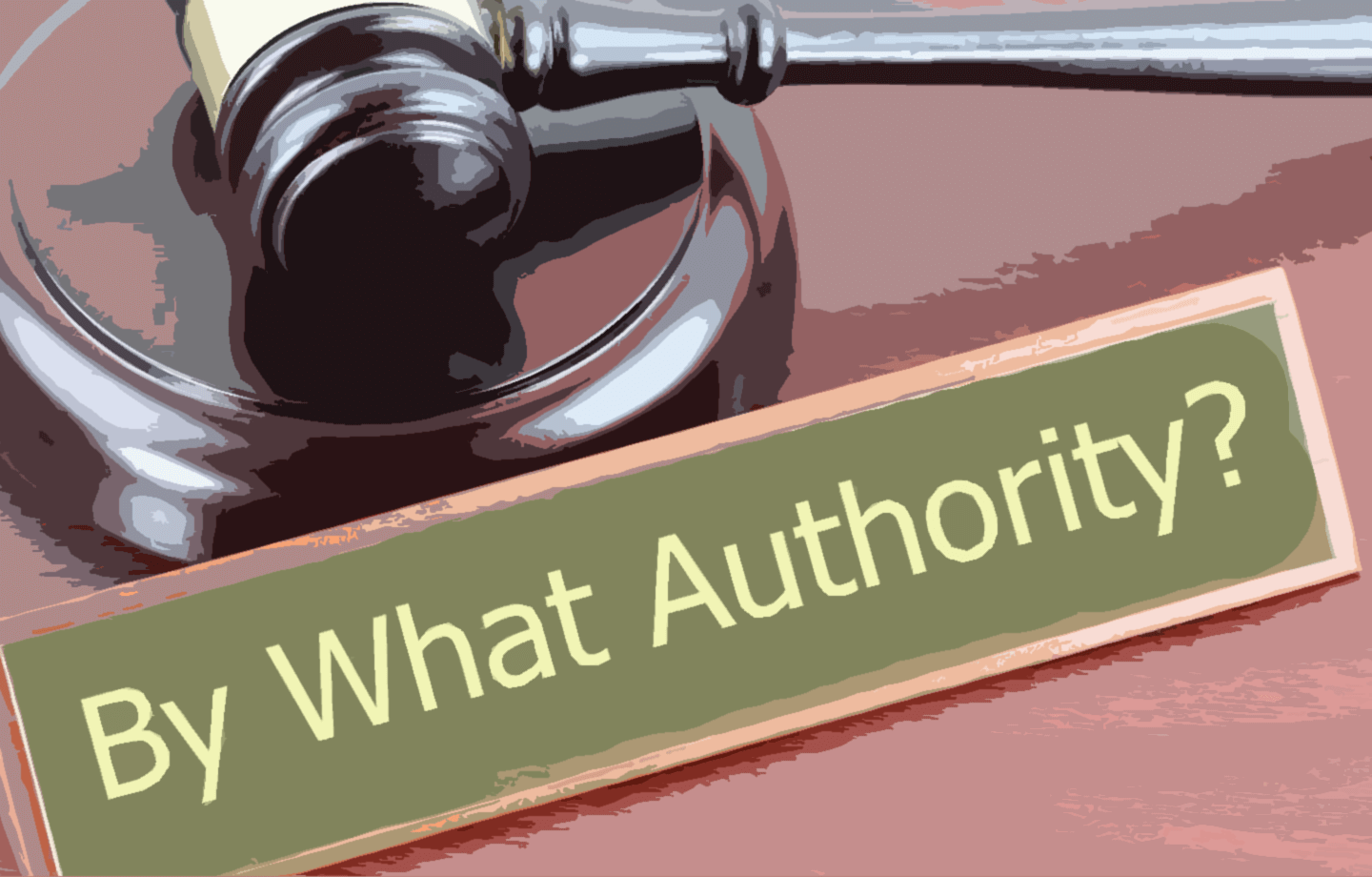 As the Congregation pauses to elect a Search Committee, Rev. Furrer asks, by what authority do ministers make their truth claims? What gives them the right to speak authoritatively?

In matters of religion, the issue of authority is foundational; basic. By what authority, one rightly asks, can I stand here week after week celebrating Unitarian Universalist values, urging of others their best, making moral claims, holding up something and asking, aloud, if this is worthy of our love? This morning I am asking that question—by what authority? —And I’ll try to answer it. I choose today because over the course of the next nine or ten months you will be engaged in an ancient and sacred practice—a collective spiritual practice, actually—culminating in the decision to call—or not—a minister. So, it is worth thinking on…By what authority?

In the Gospel of Mark—the oldest and closest-to-the-source of the New Testament accounts—we read that shortly after his baptism Jesus “went into Capernaum; and immediately on the Sabbath he entered the synagogue and taught. And they were astonished at his teaching, for he taught them as one who has authority, and not as the scribes.” [1:21-22]

In the ancient Near East, the word “authority” meant “official power.” To speak with authority was to speak by virtue of the property one owned or one’s office. For an unofficial rabbi to speak with that kind of power was remarkable…and compelling.

Those of us in the business of delivering sermons are sensitive to this question of authority—it is necessary for finding one’s voice. And re-finding it on a regular basis.

My intern supervisor at the First Unitarian Church of San Francisco in the mid- ‘70s was David Rankin. In our tutorial, he outlined five sources of the minister’s public authority.

Unitarian Universalism embraces what is called “the learned ministry.” You cannot go to Bible College for a year and become licensed. You need a four-year college degree and a three-to-four-year seminary degree. Studies include ethics, theology, the Jewish scriptures, the New Testament, church history and much more.

For most, this involves a serious financial expenditure.

Second, there’s denominational authority conveyed by acknowledged fellowship with other Unitarian Universalist ministers. Having a seminary education is only one of many requirements before one can be fellowshipped. Fellowship is in addition to earning a seminary degree, pursued simultaneously, and requiring that you

Be active in a Unitarian Universalist congregation;

Read about 100 books on Unitarian Universalism;

Intern for a year at one of our congregations;

Submit psychological test results, numerous essays, transcripts, criminal background check, and internship evaluations to two committees, interview with them and get their imprimatur.

A third source of the minister’s authority is the authority of tradition conveyed in many ways by the pulpit itself and its place in the ongoing worship life of the church. Children recognize this immediately and it is part of what interests them about church and Sunday school.

That the minister is invited to sit on the chancel—a few steps up—and regularly address the membership conveys authority.

That she or he is traditionally given complete control over the design and leadership of Sunday services—the central activity of congregational life—carries authority.

The minister—and children are fascinated by this—gets to play with all the bells and candles. We are ritual masters, and there’s ancient authority in that as well.

The flaming chalice, rotating art exhibits, banners celebrating our UU Principles and the world’s religions, pianos, skilled musicians, a choir: these things, too, constitute tradition. They add resonance. And resonance confers authority, too.

Then there is the authority of the community conveyed in the rite of ordination and in the call and installation of the minister by a congregation. This is close to the heart of it: being “called.” I had LeAnne read the statistics regarding the Wars of Religion because I wanted you all to stop and think about what you are about to do when you vote on whether to call East Shore’s sixth Settled Lead Minister. In our day and age, it is easy to forget what LeAnne read aloud earlier: hundreds of thousands of people died in defense of this right to choose our own religious leaders.

¼ of England’s 2 million households owned a Bible—the most influential indictment of Pharisees, courtiers, and tyrants ever printed.

Reading the Bible was extremely popular; the readers were amazed at how much was in there that the Anglican bishops—all appointed by the Crown—never talked about.

Meanwhile, while the English and Scotts and Irish were all killing each other, thousands were leaving the British Isles and setting up non-conforming, separatist, Puritan congregations in New England. Many of those churches are Unitarian Universalist today.

The authority conveyed in ordination is hard for someone who has not worked for it to understand. The right to choose our own religious leaders was hard-fought. I’ve heard church members in congregations I have served grumble about the rigmarole involved in gathering a Search Committee and about voting for ministerial candidates, complaining that it was all much ado about very little. Well, there was a time….

A fifth source of the minister’s public authority is the authority of his or her personal faith as exemplified in their sense of vocation. This, of course, is the hardest to get a feel for via email and zoom. Especially hard because it takes time for most of us in the ministry to find our voice, which sharing our faith requires. The Universalist poet (and patron saint of the Beats), Charles Olson, writes about finding “the middle voice”: an experience akin, I think, to what athletes describe as being “in the zone” when they feel totally on and connected to Source such that they can barely do anything wrong. “To find the middle voice,” writes Olson “is to be in business.”

The business of telling the truth;

of being thoroughly honest;

a vessel, almost, that the Self, the Atman that is Brahman, the still small inner voice may come through.

I have listed five sources of ministerial authority as though each was neatly differentiated from the rest, but they are all connected. Inner authority—the middle voice—must be confirmed by responses out in the community; you have to have that confirmation. If people do not agree to give you a chance at finding your voice and then support you through the sometimes-bumpy efforts all ministers make to find and nurture it, hearing one’s still small voice becomes all the harder and finding inner authority less and less secure. Every minister is different, of course, but I attended UU ministers’ meetings only after I was ordained—somehow the “outer” confirmation made it all much more real and gave me the chutzpa necessary to keep plumbing the depths and risking saying aloud what I felt in my heart of hearts was true. In the final analysis, a call to take up the ministry in a congregation is a call to enter a very intimate dialogue with a community,

reflecting their loves and fears, their dreams, and illusions;

loving them as individuals as best you can; and

modeling what it means to be a person of hope, good will, and thoughtful inquiry—and to do this all while being oneself.

It has always helped me to have a spiritual practice—something to keep me aware and in touch with the larger cycles and rhythms of nature, in touch on a regular basis with my soul.

In the days of the Early Church, the first ministers were chosen from among the church’s members. But these early churches were ecstatic congregations. The Protestant Reformers of the 17th century tried to recreate the zeal and sense of community they believed animated the Early Church, but things were more formalized; those who felt a knack for ministry first pursued an education and then sought a call. As my mentor the Reverend Paul Sawyer regularly reminded me throughout our years of collegial friendship, one is wise throughout his or her career to keep sourcing the Spirit. Otherwise, when you get clobbered emotionally or politically, you dry up; and getting beat up (or feeling beat up) will happen…indeed, is bound to happen. Most ministers—whether they have a spiritual practice or not—get clobbered sometime along the way. Everybody, in fact, gets clobbered, but you stick with it despite all that. That is what it means to feel and be “called.”

At a District Assembly a few years ago, I heard the Reverend Mark Morrison-Reed speak on growing up and later working as an African American UU minister. What clobbered him was the years of repressed, unexpressed grief that comes with the ministry: people you love moving away, people you love dying, having to move from town to town and saying yet another good-bye: it all added up until Mark finally left the ministry overwhelmed with sadness. A lot of self-care (sourcing the Spirit) enabled him to come back into his strength, but it was hard.

Parish ministry is hard. I recall being recently ordained and arriving at my first church as the Minister; one of the things that clobbered me in those days was how, despite my eagerness, no one took me all that seriously. Some did: Lillian Moorhead, Grace Brick, David Lyon; and I’ll be forever grateful for their kindness in treating me as a minister by asking me to address with them their pastoral concerns. Gray hair or not (for years I wished I had some), I was their minister and they reached out to me in just that way. Recently I re-read the first four sermons I gave back in 1976. And I was more impressed than I thought I was going to be–those sermons were not that bad. Too long, certainly; too left lobed, but OK. Not unlike most ministers recently out of seminary.

Try keeping all this in mind as you contemplate calling a minister next Spring. Do not waste time worrying whether or not the Candidate that the Search Committee nominates is the “perfect candidate” who will effortlessly pick up the reigns. Imagine instead—creatively visualize—someone with the capacity to grow into the job? Someone with whom you can grow together? The seven-member Search Committee that you will all vote on will spend the next nine months reviewing and interviewing widely, culminating in their decision to ask one of my colleagues to be ESUC’s Candidate for your sixth Settled Lead Minister. Members should vote their conscience—what you really feel, individually, about the person being presented, and in so doing you will be affirming the Unitarian value of freedom of conscience. But I strongly encourage all of you to add some Universalism to your calculus by voting your hope, too. For these, ultimately, constitute the authority out of which ministers and laypeople speak and about which our movement is centered: our consciences and our hope.