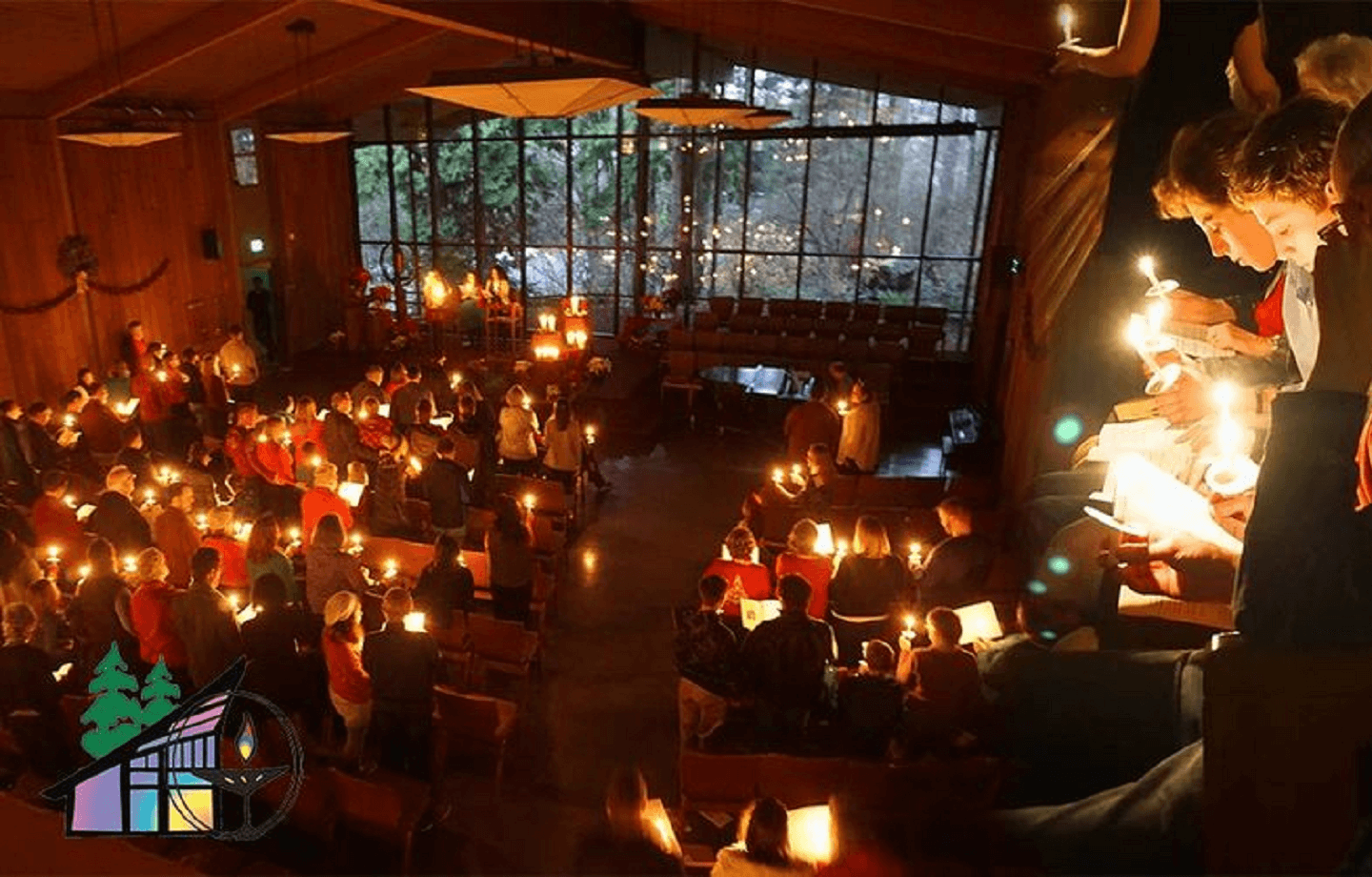 At 7:00 pm, we will offer a more traditional service on Zoom with music from Eric Lane Barnes, stories for children of all ages from Amanda Uluhan, and a Christmas sermon from Rev. Stephen Furrer. Bring your own candles to join in a lighting. Come in your holiday best, or your PJs and celebrate this meaningful night together.

“The Many Meanings of Christmas”

Christmas means a lot of different things to different people. And its meanings have transformed over the centuries. At the dawn of the early modern period—roughly five hundred years ago—Christmas was still closely tied in with the seasonal cycle of an agricultural society. December was a time of leisure and a season of plenty, that is: plenty of food and drink. It was a time when consumption—over consumption—was expected. Late fall and early winter were a time to gorge on the best food and drink—not just bread and beer, but “cakes and ale.” It was a It was a time for splurging until the hard freeze of winter took hold and with it the constraints of ordinary existence reimposed themselves.

Christmas celebrations in those years were nothing like nowadays. The holiday involved rowdy displays of debauchery, the mockery of established authority, aggressive betting, and the invasion of wealthy homes. Christmas was a time of “misrule” in which a carnival atmosphere prevailed. Much of this behavior was ritualized; peasants, servants, and apprentices exercised their customary right to be wined and dined by their wealthier neighbors. So, the Lords of the Manor let the peasants in and feasted them, trading aristocratic goodwill for fealty from their tenants.

By the early eighteenth century, and especially here in America, this all began to change. Clergy other community leaders began to call for a Christmas that combined laughter, moderation, and devotion—the first effort to “put Christ into Christmas.” By the American Revolution, Christmas was widely observed, but less as a celebration of misrule and more as a religious holiday. While Universalists and Unitarians were both instrumental in this transformation, it was the mythical figure of Santa Claus who made all the difference. Customary Christmas license combined with seasonal unemployment made the season too noisy, drunken, and threatening in the eyes of respectable citizens. Parades of working-class young men and boys would march through cities like New York and Philadelphia making a racket and, sometimes, mayhem. They would occasionally intimidate the well-to-do who came to agreement on the need for counter-rituals to all the hooliganism. One such wealthy New Yorker was Clement Clark Moore, credited with writing “A Visit from St. Nicolas” in 1822 to amuse his children, and read earlier by Sheila and her child, Marcus. In Moore’s vision Christmas became a family celebration, transforming Christmas into a practical, simple ritual that every household could—and soon would—embrace. A new kind of holiday—domestic and child-centered—had been fashioned out of the old rowdy one and grew rapidly in popularity across the land.

The other Children’s Story, On the Night You Were Born, focuses on the miracle of birth for every child and in every family. It reminds me of the poetry by our highly esteemed Unitarian Religious Educator, Sophia Lyon Fahs, when she wrote:

Each night a child is born is a holy night,

Sitting beside their children’s cribs

Feel glory in the sight of a new life beginning…

Meanwhile, Christmas has many other meanings, too, especially from a religious perspective. Orthodox Christians believe that Jesus’ birth was unique from other births in that he was uniquely divine and born of a uniquely devout mother. And, moreover, that his birth was foretold by ancient prophets centuries earlier. As Unitarian Universalists we generally follow the teachings of the legendary William Ellery Channing, one of the three principal founders of Unitarianism in America, who considered the Virgin Birth as happening every time one’s heart generates a pure thought or virtuous impulse.

In today’s era we all now recognize that the blue eyed, blond Jesus portrayed in American Sunday schools throughout much of the 20th century is no doubt far from what he looked like. His ministry was universal, transcending the rigid strictures of Hebrew society at the time, but his devotees have always been far more parochial, and this from the earliest days following his death, and even while he was alive. There have been vigorous debates over the meaning of Jesus’ life, his death, his teaching, and his ministry of healing. The proto-Unitarian Thomas Jefferson believed Jesus’ teachings provided “the most sublime and benevolent code of morals which has ever been offered to [humanity.]” And I pretty much agree. But these teachings were, and are, as I have said, universal. And it is only in the modern era that we are coming to terms with what that actually means for those who want to follow the moral code Jesus exemplified.

W.E.B. Du Bois was an original founder and incorporator of the NAACP, and editor of its publication the Crisis. A teacher, author, poet, and scholar his “The Sermon in the Cradle” was published 99 years ago this month, beginning a slowly growing awareness across our country of America’s Eurocentrism and its allegiance—often but not always unconscious—to the historical white supremacy upholding our way of life. Du Bois helped people see—if they wanted to—that white supremacy even upholds religion.

But not the heart of faith; The open, loving heart sees things exactly as they are… and acts lovingly and creatively anyway. Celebrating song and story together (even if only via Zoom), sharing gifts and recipes, remotely watching favorite movies or concerts with family and close friends: these are all ways we find meaning in Christmas year after year, no matter what is happening epidemiologically. So, let us be glad. And let us continue our celebration of this favorite holiday. Ho-Ho-Ho! And amen.