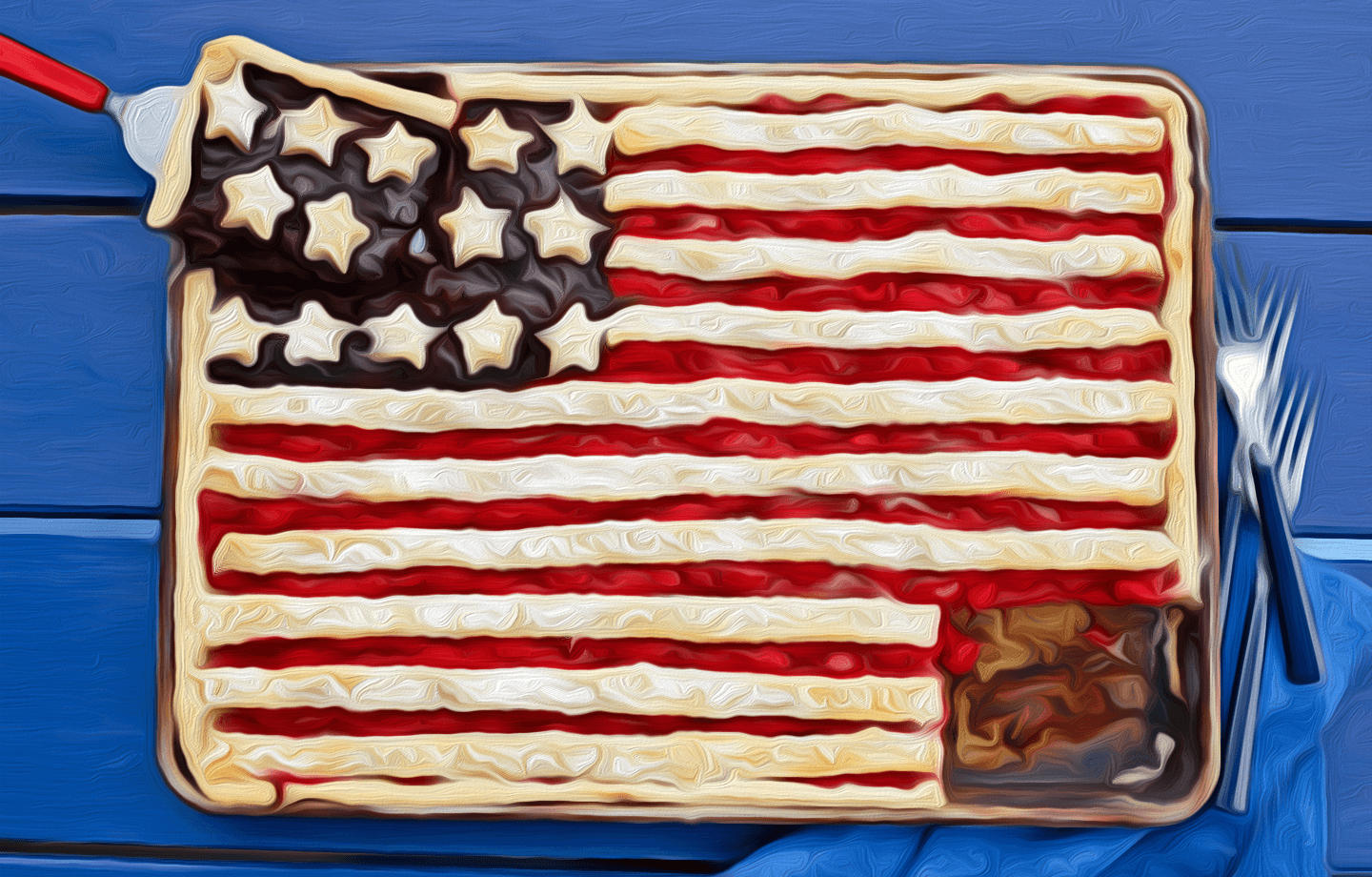 Rev. Furrer, preaching on the perilous state of democratic society in the current age, how we can defend it, and what are our prospects of success?

When I was a child, I walked about 2/3 of a mile to school and back home twice a day. I remember learning about our country: that it was a democracy. As we used to say on the playground: “it’s a free country. You can’t make me!” And it was understood to be a fait accompli. That America was a free country, period. The matter has been settled.

It was kind of like folks who designate really insightful people as “enlightened…” as though they had “arrived” at a certain level of consciousness—a plateau—from which there is no descent and that henceforth their lives would be free of any problems. Which is nonsense. One always has work to do on oneself.

Similarly, democracy is not something that once accomplished, has been forever achieved. No. Democracy is always up for grabs. Always in balance. Always requiring vigilance to keep it alive, healthy, and thriving. This is what I want to preach on this morning.

Our country, in the immortal words of Abraham Lincoln’s Gettysburg Address, was “conceived in liberty and dedicated to the proposition that all people are created equal.” Liberty. And equality. Two equal foundational aspects of our government. It’s a good formula. Curtail liberty or promote inequality and the government will become increasingly unstable—as we learned in the years leading up to, during, and immediately following the Civil War. Build up equality and encourage more freedom—like the period between 1933 and 1978—and we become unified as a people and strong enough to win the Cold War and the Space Race while leading a thriving global economy.

My father, a Republican businessman, used to say “a rising tide raises all ships.” This is because sharing the wealth broadly across the economy helps everyone do better—and helps the economy thrive. It was this operative default position that got America out of the depression, through the Second World War, and—with the fall of the Berlin Wall thirty-two years ago this Tuesday—into the role of supreme global superpower.

Though President Washington warried of political parties, they soon came into being and have been jockeying for power ever since. James Madison, acknowledged as “father of the constitution,” worked with fellow Virginian Thomas Jefferson to unite agricultural and rural interests in opposition to the mercantile interests of the more urban, artisanal North. And they were remarkably successful, beating their rivals in all but four presidential terms between our founding and the outbreak of the Civil War, which ended the slaveocracy’s effort to impose their unequal, unfree vision of what the country’s founders had sought to establish.

The Civil War was such a bloodletting and so collectively traumatic that, despite the high cost that had been paid, our people—or most of them anyway—could not maintain the high resolve necessary to sustain multicultural freedom and a semblance of equality. By the late 1870s multiculturalism retrenched back into white supremacy. In the South, that supremacy was structured to inflict fear and terror, but lack of access to job opportunities and wealth accumulation for non-whites were ubiquitous across the land. The combined efforts of the Teddy Roosevelt’s Progressive Republicans, Franklin Roosevelt’s New Dealers and LBJ’s Great Society Democrats during the 20th century sought to alleviate the worst inequities and broaden opportunities, that greater democracy—a more perfect union—might be achieved. And serious progress was achieved. Progress that began to slow…and then reverse itself, beginning in the middle of the Jimmy Carter Administration. Most indices for comparative pay and comparative wealth accumulation have been heading downward ever since.

In 1989 I became a founding member of Unitarian Universalists for a Just Economic Community. We organized to help demystify economic policy and help our UU members understand and resist the “trickle down” University of Chicago conservative economic orthodoxy advocated by the neo-cons in the George H. W. Bush Administration, and all their imperial adventurism. I applied for and was awarded grants to arrange seminars and sponsor colloquia. At G.A. in 1997/98 we passed the most comprehensive social and economic justice resolution since the 1917 Universalist Declaration on Human Rights.

Slowly, over the two decades since, our denomination has moved progressively towards a more radical stance with respect to economic justice.

It’s understandable that people are reluctant to embrace radical economics. Carol and I are bit players when it comes to accumulating assets; we’re proud of what we have managed to put together, but both of us—as both of our mothers cautioned, are warry of letting others take control our property. Nevertheless, we’re generous and have communitarian spirits—like many of us ESUC-ers, I am sure.

One of my great heroes is George Washington, and for a lot of reasons. One reason I so admire the General is that, in 1776 he was one of—perhaps the—wealthiest persons in the American colonies. He was not the cleverest of the revolutionaries. And yet despite his relative affluence and his unschooled stolid, down-to-earth practicality, George Washington had a vision of democracy that, once imbued into his being, he never abandoned, nor wavered in its support, joining his revolutionary comrades in pledging his life, his fortune, and his sacred honor to their revolutionary cause.

After the Revolution, James Madison produced the constitutional plan, drawn out of rough pro-types from antiquity and the contemporaneous Iroquois Federation. The constitutional order was designed with human lust for power clearly in mind—and how to prevent that lust from turning self-rule into misrule: the separation of powers and tiered federalism with multiple power centers—state capitals and commercial hubs as well as the national seat of power in what eventually became Washington, DC.

I am not an alarmist. I am also, at the core of things, a theist, believing that the Creative Spirit—the force that through the green stem drives the flower—is at the center of everything and that all is and ever will be well. I believe that, but I also know that sometimes (a lot of times) that spirit can feel darned elusive. We all see that, when looked at rationally the global warming / nuclear Armageddon doomsday clock is every day ticking ever and ever closer to exploding. Horrors!

What to do? First of all, do not forget all the beauty and grace that surrounds us everywhere, every day. Feed your soul with beauty and art and meaningful relationships. You will need them in the days ahead.

Secondly: read the Washington Post’s three-part, thousands-of-words article on the prelude to January 6 Capitol Insurrection, and the ongoing aftermath. It’s dozens of pages, but I am going to make sure that everyone in our church gets either an electronic or a hard copy of this important report. When it appeared that the Congress would not convene and charge a non-partisan committee to investigate the January 6 assault on our way of life, the Post appointed 75 investigative reporters to analyze former President Trump’s efforts to delegitimize the last election and sow seeds of mistrust and no confidence in fair elections among his followers. He began this in 2016: lying about election integrity and fomenting increased suspicion among the electorate.

I remember reading a book by Nobel Lauriat Sinclair Lewis back in high school: It Can’t Happen Here. It’s about the rise of an American demagogue who is elected President after inciting fear and promising drastic social and economic reforms while promoting patriotism and “traditional” values. I also read a couple of other books by Lewis—Main Street and Babbitt—and he perfectly nails the unimaginative, rah-rah parochialism of the American Midwest and its people (of which, I must admit, I was born.) But I did not think It Can’t Happen Here was accurate. I did not think Americans were that gullible and manipulatable. Nowadays I am increasingly unsure.

I’ve read a lot of history and I’ve read a lot about religion. I know about amazing popular delusions and I know a lot about cults and about cultic behavior. Former President Trump’s niece, Dr. Mary Trump, is a Board-Certified Clinical Psychologist who has written about her uncle’s unbalanced emotional state of mind. He is extremely fearful of being exposed as a loser and a fraud… and all his protestations of having the election “stolen” from him are absurd. President Biden won 81,000,000 votes and dozens more electoral votes than the has-been loser Trump. Trump is toast. But as his fragile ego is so desperately threatened, he is in turn is threatening to pull our whole house down. It looks as though the 2020 election may simply be a prelude to ‘22 and ‘24.

If that is be so, then we must be ready to prevent it. Unscrupulous GOP state legislators are in the process of passing election “reform” laws that actually make voting harder and less free than in the recent past. This should not happen. Thank goodness our scrupulous GOP Washington Secretary of State, Kim Wyman, has just been nominated by President Biden to sort through all this on the federal level and to make voting simpler, more convenient, and completely secure.

Former President Trump and his allies began their disinformation campaign a year and a half ago when he released a torrent of preemptive attacks on the integrity of our country’s voting systems. The attacks he made ultimately led to the January sixth rampage inside the Capitol Building, the worst desecration of that democratic citadel since it was set ablaze by the British during the War of 1812. Five people died in or immediately following the January 6 insurrection and 140 police officers were attacked. What the Washington Post series makes clear is that “the insurrection was not a spontaneous act nor an isolated event. It was a battle in a broader war over the truth and over the future of American democracy.”

Since January 6, the forces behind the attack have magnified. Mr. Trump has been emboldened, sustaining his “big lie” about his election defeat, and demanding more restrictive laws and investigations of the 2020 results that have repeatedly been affirmed by ballot reviews and the courts. A deep distrust in election integrity is shaking the foundation upon which The Democratic Experiment was built—the shared conviction that our national leaders are freely and fairly elected.

In the months before January 6, President Trump rallied his supporters to Washington, many with the intent to commit violence. On that day he hunkered down with his aides for almost three hours and a quarter, and resisted pleas to stop the insurrectionists. And every day since, menacing threats and disinformation have continued to be spread relentlessly across the nation. May Day! May Day! This is what I mean by democracy being up for grabs. It’s imperiled. And the assault is potentially fatal.

As I said at the beginning, I am not an alarmist. I am not trying to scare you. I worked in the US Capitol. Let me be clear: these are not ordinary times. And Donald Trump and the modern GOP are not your typical would-be autocrats—their intentions are anti-American and teetering towards treason. And their effort to subvert our government was, it now appears, but a preview of the Trump Cult’s game plan for 2024 and beyond—IF our citizens allow it without unified and organized resistance. Politically, nothing is more important. Amen.