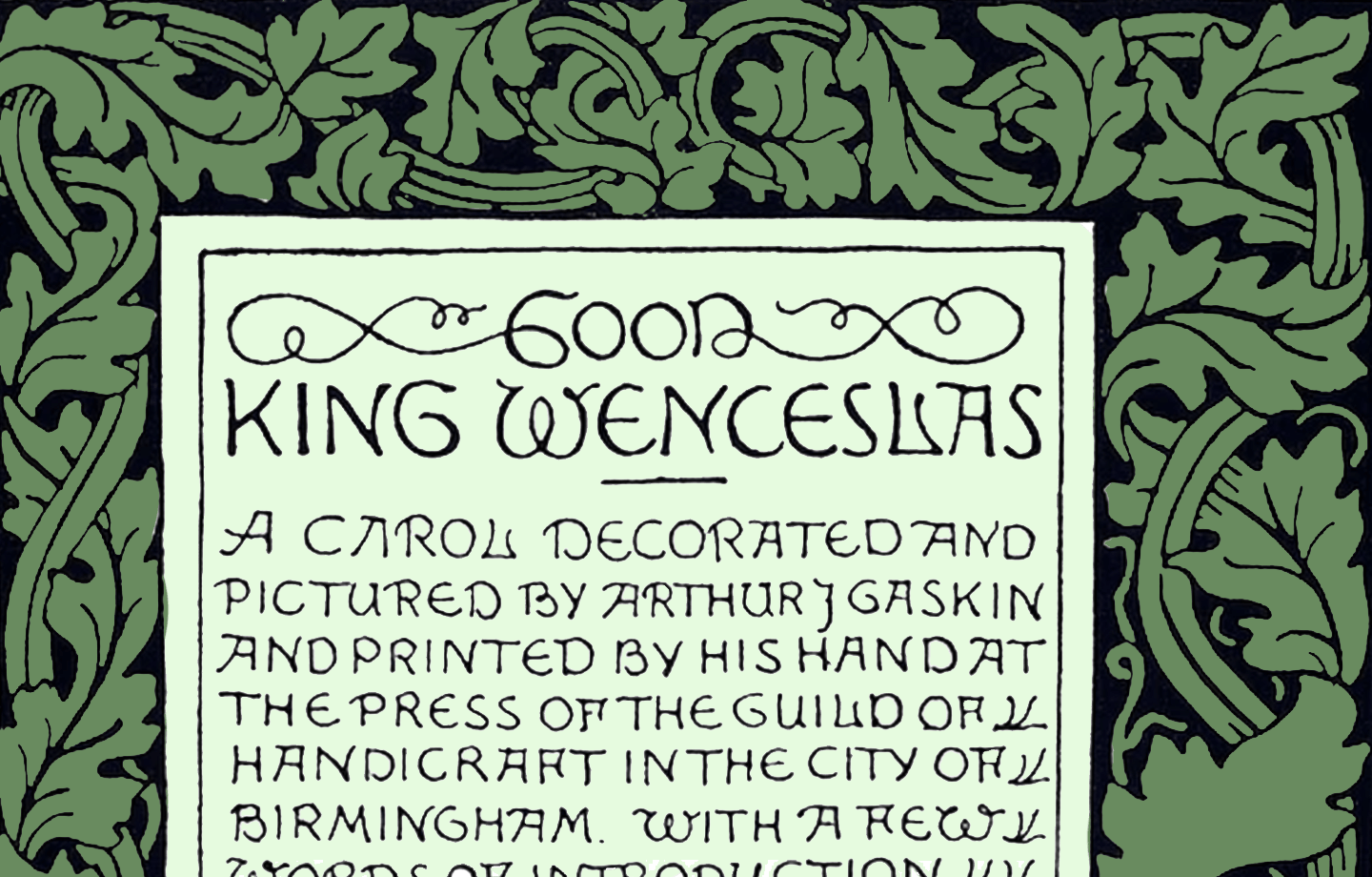 Good King Wenceslas has long been my favorite Christmas Carol, partly because it includes a verse with my name in it, but far more because of its poignant social outreach message in a medieval context, its crisp, clear images, and its lovely melody.

​That has long been my favorite Christmas carol. The images and lyrical poetry of John Mason Neale, the hymnist who wrote it in 1853, are compelling and immediate affective. I always liked it, first, because it mentioned my name: “Good King Wenceslas looked out / On the Feast of Stephen / When the snow lay round about / Deep and crisp and even.” As I grew older, I came to appreciate the legendary Reverend Howard Thurman’s observation that it is actually after the star disappears and the shepherds and magi all go home that the work of Christmas truly begins: finding the lost, healing the wounded, and rebuilding a broken world. So it was that on the day after Christmas Wenceslas gathered his faithful page and went forth into the ever-present storm outside to serve his people. And it was by virtue of his noble character thus portrayed that we all regard him today.

There actually was a bonafide King Wenceslas who reigned over a thousand years ago in Bavaria, in the early 900s. After about a decade as ruler, he was murdered by his brother—Boleslaus the Cruel—who usurped the throne. Now as it turned out, Wenceslas became venerated as a martyr and a saint almost immediately after his death. Within a few decades several biographies (hagiographies) had been written about the man which had a powerful influence on the High Middle Ages conceptualization of the rex iustus, or “righteous king” —a monarch whose power stems from great piety and sovereign vigor. The lyrics to “Good King Wenceslas” were written only 168 years ago, but its melody is much older—a 13th century tune in praise of the blossoming spring.

The 19th century was a period of rapid social and political change: in Western Europe, the industrial Revolution was in full swing, drawing people off the countryside and into cities. In America settlers were sweeping across the country from the Genesee to the Willamette Valleys, building canals and turnpikes, clearing forests, and building up the land. And they were expanding the franchise—for white men, anyway—allowing to propertyless far more autonomy and political power than they had ever been granted before anywhere else on earth. People like the Transcendentalists Margaret Fuller and Ralph Waldo Emerson, and others began drafting essays on women’s rights, the rights of non-Europeans, civil disobedience, the abolition of slavery, and other social blights.

It was in this context that John Mason Neale wrote his famous hymn. And there were others writing in a similar vein. One of them was Charles Dickens. His well-known fable, “A Christmas Carol,” was published in 1843. In high school Mr. Westover, one of the English teachers, read it to us in assembly every year on the last day before winter break. And probably almost all of us have seen George C. Scott’s adaptation—and several others—of the Bob Cratchit, the Ghosts of Christmas Past, Present, and Future, and the miserly Ebeneezer Scrooge. What a story!

Charles Dickens was the most popular author of his day. His stories all describe the social and economic upheaval in mid-19th century England, its painful personal and psychological consequences, and the perseverance of some diligent souls who make the best of it against great odds. He was a fierce critic of the pervasive poverty and social stratification in Victorian society. I am reading a Charles Dickens novel right now—A Tale of Two Cities—and enjoying it immensely. Especially his descriptions of sanitary and social conditions and of the many rogues, ne’er-do-wells, and misanthropes who make up his stories, are captivating. And quite accurate.

It is worth noting that Charles Dickens in those years regularly attended a Unitarian Christian Church in London. Such churches were modern in that they affirmed modern analytical Biblical scholarship and textual criticism. These churches were scientifically aligned, such that his contemporary, the poet Robert Browning, wrote of him that “Mr. Dickens is an enlightened Unitarian.” He had little taste for Roman Catholicism, spiritualism, or 19th century evangelicalism which he considered to be extremes of Christianity that limited one’s personal expression while clouding their reason. However, he was tolerant of all these religious views when held by others. And as anyone can read who plows through the corpus, his liberal UU views sprinkled throughout his books and stories, not only in “A Christmas Carol.”

Now the birth of the prophet Jesus as outlined in the gospel accounts is pure myth. And as myth it does not rise or fall on account of the “facts.” Western heroes tend to be born of humble origin in lowly circumstance, unlike those of the East who, like the Buddha, Confucious, or Lao-Tzu were royalty or people of high professional stature. And remember, in myth all aspects of the story are happening all the time. The Holy Birth was not a one-time event. Our cultural salvation is coming to birth right now in the corners of the Empire. Maybe in Manila. Or in San Salvadore. Or Enumclaw, or Lake Stevens for that matter. The archetype, of course, of such a birth is that of Jesus. In the account written by Matthew it is as though the baby and his parents were political refugees in flight from Galilee to Egypt. Pausing—just long enough—for the child to be delivered.

As myth, though, we must remember: Jesus is being born and reborn every minute. It is not a one-time event, but a continuing event. In the words of the great Unitarian religious educator Sophia Lyon Fahs, (as rendered Reading #616 in our hymnal),

Each night a child is born is a holy night,

sitting beside their children’s cribs

Feel glory in the sight of a new life beginning….

A time for singing,

A time for wondering,

A time for worshipping.

The innocence, hopefulness, and inherent kindness of children—here lies the redemption of the world. And this is the message at the heart of Christmas. For human beings, children are our light in the darkness, our bit of green amid the wet and grey of December. Like mistletoe, children can be somewhat parasitic, but simultaneously they “save” us, too, by reminding us of our truest values and engaging our hearts. The cardinal virtues of hope, faith, love, and forgiveness are stronger in the average child than in most adults. And these virtues are what save us and save humanity, too.

As it says in the First Letter of John, Chapter 4—a favorite passage of the Old Universalists and often emblazoned across their altars.

Let Christmas 2021 be a wonderful celebration of life and love, and joy. But also let it be a reminder of all the ways we are called to these virtues every day, every hour. And by living them out in our daily lives we bring the meaning of Christmas to its ultimate, most holy expression. So may it be. Amen.