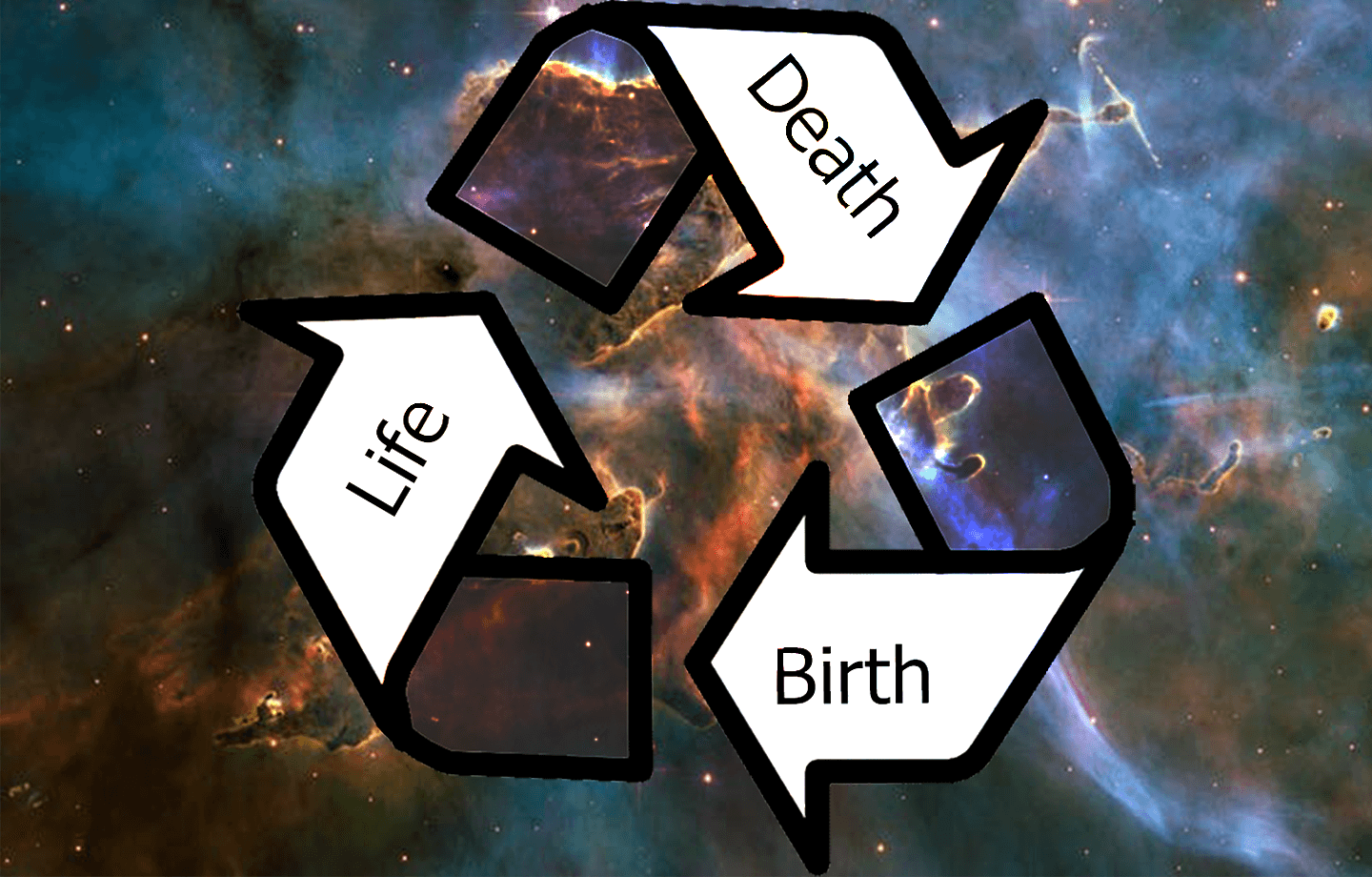 I want to preach this morning on reincarnation. Reincarnation, essentially, is the idea that when we die, our spirit (or soul, if you will) continues, first in a sort of netherworld for a time, and then returns to earth to be re–born in the body of another. Whether you’re reborn into a kind, loving home or among the cruel and selfish, is a function of the karma you accumulate (or burn off) during your current life.

Sketchy as such notions may appear to those who first hear of it, reincarnation is a very widely held belief.

From “The Oversoul” by RWE:

“We live in succession, in division, in parts, in particles. Meanwhile within us is the soul of the whole; the wise silence; the universal beauty, to which every part and particle is equally related; the eternal ONE. And this deep power in which we exist, and whose beatitude is all accessible to us, is not only self-sufficing and perfect in every hour, but the act of seeing and the thing seen, the seer and thew spectacle, the subject and the object, are one. We see the world piece by piece, as the sun, the moon, the animal, the tree; but the whole, of which these are the shining parts, is the soul. Only by the vision of that Wisdom can the horoscope of the ages be read….”

The essence: It all comes down to this: “Who are you?” (Lewis Carroll’s repeated query…)

So, what do I think about reincarnation? I am sure not going to dismiss it.

I have especially enjoyed researcher Jim B. Tucker’s books, helping me understand quantum mechanics and how, at its deepest levels, the universe is far more magical and wondrous that Newton ever imagined. And apparently, altogether influenced—in fact determined—by our observations of it. Further study, as Carl Sagan suggests, is warranted. I also like and strongly approve of the moral message implicit in reincarnation: learning how to grow beyond narcissism, how to focus one’s life energy on bringing love and knowledge into the world and helping others to do the same is what it’s all about.

What I don’t recognize and have a hard time getting behind is the whole “Architecture of the netherworld” as described by many of the authors writing on this subject.

I want to close with two anecdotes about the end of life from two well-know proponents of reincarnation, the Buddha and the Unitarian Transcendentalist Henry David Thoreau.

Buddha: “I have preached for 35 years and I have spoken to none of this. I have spoken about suffering on earth and its alleviation.”

Thoreau: “One world at a time.”

Story for All Ages

​Becoming the best people we can be, now that takes work! And, what does it mean and how do we get there? You see, every religion has a fundamental belief system that it structures itself around, and it usually has a lot to do with that very question. In Unitarian Universalism, it’s our belief that all of us come from the same place, and that everyone lives are sacred. In Buddhism, it’s the belief that life is suffering. Now those may sound like two are almost opposite beliefs but they’re really both rooted in liberation, that our lives and the lessons we learn can help us to be the best people we can be. Buddhism goes on to say four noble truths which tell us that life is suffering through a complete understanding of suffering, the causes of suffering, that suffering can end, and then how to overcome that suffering through the eightfold path liberation. These truths were the first teachings of the Buddha.

Gautama Buddha is worshipped by Buddhists as the enlightened one, who reached nirvana and was able to escape from the cycles of life and death. In Buddhism, it is believed that most of us are born, live, and die, only to be reborn in some other form in some other time in the cycle of samsara. After many lifetimes as a bodhisattva, eventually Siddhartha Gautama Buddha was born to live his final life. These cycles of birth and rebirth, or reincarnation, are to help us continue and fulfil the previous life’s task. Most of us are unconsciously born again and again in the cause and affect cycle of karma, without choosing to be reborn. But the buddha, reaching nirvana, didn’t have to be reborn. And A bodhisattva is a spiritual leader who is chooses, voluntarily, to be reborn to helping those stuck in the cycles of rebirth and relieve some of the suffering of others.

Lamas and other important Buddhist leaders were traditionally found after several years of searching. Sometimes, it can take as long as four years after one Lama dies for the next to be found. People like the Dalai lama choose to be reborn and often leave letters and other information to help guide the search for their reincarnated being.

In February 22, 1940, Lhamo Thundop, became the 14th Dalai Lama. He was born and was living in Tibet, where all of the Dalai Lama have come from. In 1959, during the Tibetan uprising, fearing for his life, he Dalai Lama fled Tibet to Dharamshala, India where he continues to live in exile. There are over 150,000 Tibetans living in exile, outside of their homelands. The Chinese government has occupied and governed Tibetan lands and people since at least 1792. In 1989, the Dalai Lama received the Noble peace prize. Although now retired from political life, the Dalai lama continues to provide important and profound spiritual leadership for the Tibetan diaspora and people around the world.

The 14th Dalai Lama has suggested that he may not be reborn, and if so, the Dalai Lama may be choose to reborn in an area outside of Chinese rule, and as a woman. Although the Dalai lama is not a blood lineage like with kings and queens, the 14th Dalai Lama still suggests that its origins are in the feudal system, and that this type of leadership may not be what the world needs right now. The 14th Dalai lama goes on to say that the world belongs to humanity, not to leaders. That every one should be able to contribute their right of conscience, and have a voice and a vote in matters that concern them, just like our 5th Unitarian Universalist principle.

The Jataka tales, sacred Buddhist text, tell many stories of the previous lives of the Buddha to understand how this soul learned all of the lessons he needed to reach enlightenment.