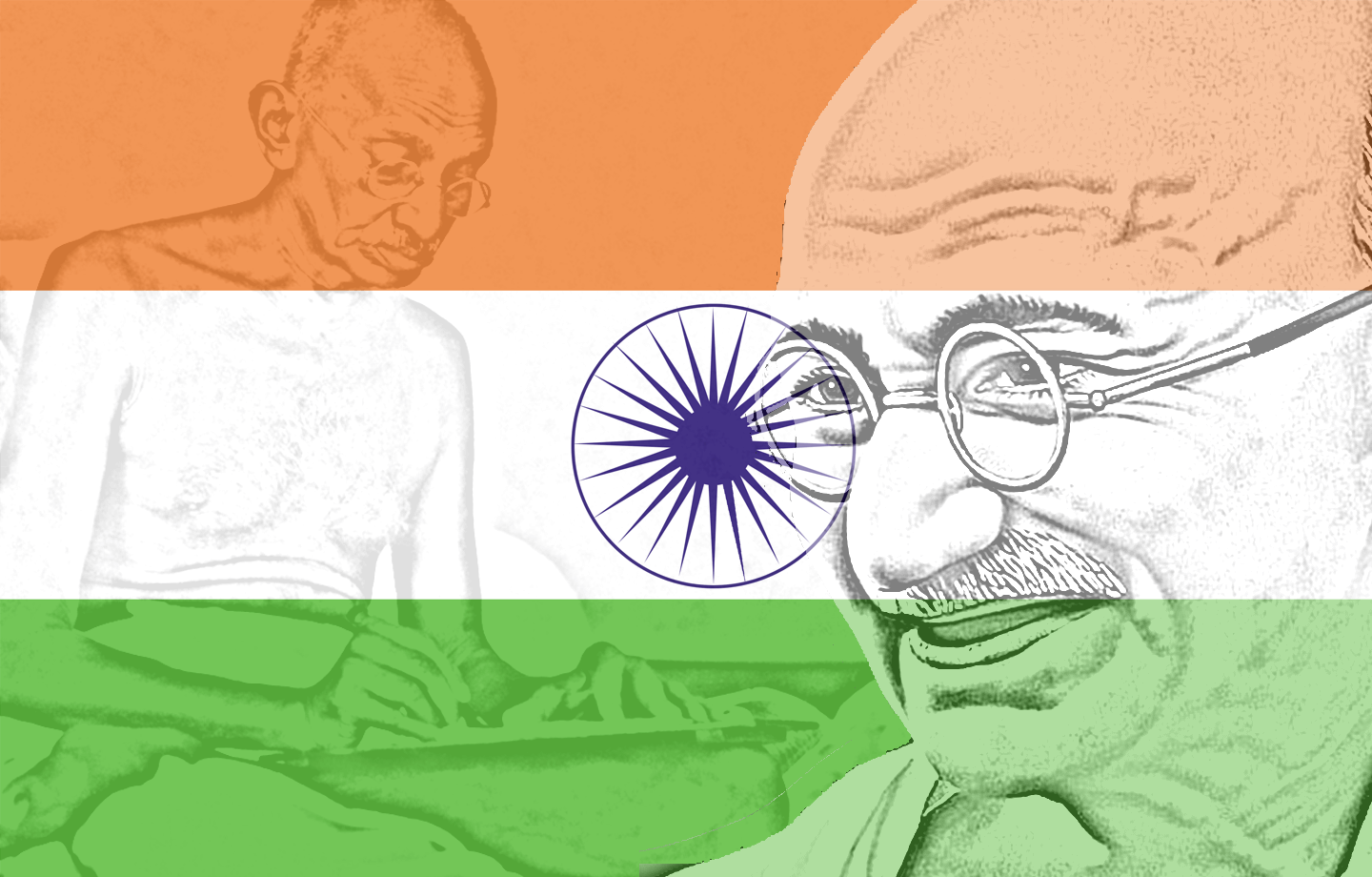 In 1925 Mohandas Gandhi published his Social Sins of the Modern World, the last of which was Religion Without Sacrifice. The celebration Veterans Day reminds us of our fallen veterans’ sacrifices, but what can we say of their religion?

When I first began thinking about this sermon I was thinking about Veteran’s Day, celebrated a few days ago, and the many soldiers and sailors over the years who made the so-called “ultimate sacrifice” of giving their lives in military uniform supporting their country. But the original meaning of sacrifice is not on behalf of one’s country, but the offering of something to a deity. These can be significant offerings (“Unto Thee I commend my Spirit”) or more modest (as, for instance, Socrates’ last, kind of offhand remark to his neighbor and comrade, Crito: “And don’t forget to sacrifice a rooster to Asklepios.” (Asklepios, incidentally, was kind of a demi-god: a human hero with serious healing powers, including authority—even though he was a mortal and in fact already dead—to sometimes bring other dead people back to life. Thus, asking his friend and neighbor Crito to make such an offering was logical and timely.

In Athens and elsewhere sacrifice in the early days always involved killing something living and offering that to the priests, who divvied up the choicest parts for the deity and split the rest between themselves and the poor. As E.O. James outlined in this morning’s READING, among the people of ancient Palestine—including the Israelites—human sacrifice was a recognized and widely accepted custom, including among the Israelites. Over the centuries following the conquest of Canaan, however, the practice of “giving up first-born sons” began to wane. In its place a substitute victim was offered instead of a human one, as told in Genesis 22: 1-14 of Abraham almost sacrificing Sarah and his late-in-life baby Isaac… and at the last minute substituting a ram.

Sacrifices consisted of only domesticated animals, grain, and the first fruit of trees, vineyards, and gardens. Under no circumstances might wild animals be sacrificed. In 621 B.C.E. Jewish sacrificial practice was reordered: thereafter sacrifices were to be offered at only one single place in the all Israel: The Temple at Jerusalem. This continued for 700 years until the destruction of the Temple by Romans in 70 C.E. brought the entire Jewish sacrificial system to a sudden permanent end. From then on until today (for the most part) prayer and service in the synagogue superseded sacrifice as the basic medium of divine worship throughout Judaism, soon to be joined by Christianity and Islam across the Western World.

Humanity across the world continues employing prayer and service to focus worship. And we still make burnt offerings and anoint with smudge sticks and incense to bless dwellings, voyagers, and special moments in our lives. And though these are neither human nor animal sacrifices, there are parallels.

Mahatma Gandhi is one of the great heroes of the 20th century. Building on the work on nonviolent resistance writer and practitioner, the Unitarian Henry David Thoreau, Gandhi organized a decades-long struggle to successfully end 200 years of British settler colonialism in India. In 1925 Gandhi published his list of the seven social sins, written at the top the Order of Service1. [Wealth without work; Leasure without conscience; Knowledge without character; Commerce without morality; Science without humanity; Politics without principle; Religion without sacrifice.  Published in Young India, 10/22/1925.]

A nearly identical list had been published a half year earlier in England in a sermon by the archbishop at Winchester Abby. But the great Indian liberator took what he had been given and reworked it slightly. Below the list Gandhi wrote that “…the friend who sent me this does not want the readers to know these things merely through the intellect but to know them through the heart so as to avoid them.”

Gandhi’s list: Wealth without work; Leasure without conscience; Knowledge without character; Commerce without morality; Science without humanity; Politics without principle; Religion without sacrifice. [Published in Young India, 22 Dec 1925] All of these maxims are good guides, indeed, for behavior to be avoided. They are aspirational, something to strive for, to keep in mind as kind of a devotional mantra to help maintain one’s bearings and moral compass. And they’re well worth keeping in mind.

But here’s the irony: Religion without sacrifice has an attractive sound. Is it not an advance for civilization that we have eliminated gruesome animal sacrifices? Not to mention human sacrifice. Ugh!

What could Gandhi have meant? I remember when my now 41-year-old daughter was in middle school and told me about her girlfriends whose parents admonished them repeatedly: “I have sacrificed SO MUCH for you, you must perform as I have schooled you properly appreciate!” To which I would say, “Meredith: the extraordinary gifts you have given me so outweigh anything I had to shell out that I consider it a wonderful bargain; one I got a lot more out of it than I ever could have imagined.”

Consider, if you will, the important ways that we willingly sacrifice for whatever we hold high. My grandparents willingly forwent many pleasures so they could afford to send their children to college, despite the Great Depression. My mom went back to work as an inner-city librarian to make sure her kids had the same better chance. These were sacrifices, but they were recognized by those who offered them as wonderful because of their love for the recipients. Seeing my daughter blossom into a strong, vibrant, politically, and socially aware and loving woman was all I wanted or needed to feel happy and fulfilled about the equation. As Bob Dylan says, “Everything was paid that was owed.” And more.

As a minister I have occasion to perform many weddings: I think I’ve officiated at the nuptials of around 435 couples. They are occasions for great joy and festivity and a lot of fun. Every clergyman or clergywoman is different, but most of us schedule two or three meetings with the wedding couple to get to know them and figure out who they are and what getting married means to them; what they want the ceremony to highlight and say about them and about their love for one another. We talk about what marriage means to them and what they want to pledge to each other in front of their loved ones and before their consciences, and before and God.

At which point, one of the things I always try to share is an insight from my seminary professor, Process Theologian Bernie Loomer. That when you are marrying another you are not pledging your troth to the other person. After all, s/he will change, as will you. Indeed, every seven years every cell in your body is new. We are not the same people as time goes by. So, the idea going forward is to pledge your troth to the relationship. And that’s where an element of sacrifice comes in.

The wedding ritual itself is designed—not so much to change people, but to re-make them. The sacred circle of the wedding party, aligned as it usually is around the altar, is linked architecturally and psychologically to the cosmic umbilicus running through all of creation. The celebrants are brought, through the power of the ritual form, back to the caldron of creation and becomes RE-MADE as one loving team. Neither is asked to become subsumed in the other, only to make their relationship their loadstar, not just themselves any more. This also makes it easier for them to adjust to children and the added responsibilities of parenthood coming down the line.

And that’s a serious sacrifice. Giving up autonomy over oneself alone to become mutually responsible for preserving and nurturing love between you and another growing person.

Here our church covenant offers a vision for recognizing a larger, shared spirit we share. A true Christian might call it the Holy Spirit. A Native American might say Great Spirit. Some people, apparently, can barely see it at all. I remember in the wake of the 2008 global economic crisis, the Tea Party suddenly arose, indignant that the federal government would even think of offering support to people who had been fleeced on home loans. Tea Partiers, of course, epitomize those who cannot agree to, and can never see the value of, sacrificing any property for the sake of the common good.

It is not about denying oneself to another, but about sacrificing personal egocentric wants and desires to become a part of something larger and more dynamic. And promising transformation.       May it be so!       Amen.