Over the May 28th weekend, an honoring ceremony for Lummi Elder & Carver, Se Sealth (Jewell Praying Wolf James), was held at the longhouse (Wexliem Community Center) on Lummi grounds near Bellingham. As an attorney and activist, Mr. James has been a leader nationally and internationally in securing treaty rights, protecting the environment and ensuring sovereignty for native American tribes. As head of the House of Tears Carvers and a long-time leader of the Lummi Indian Nation, he launched a series of Totem Pole Journeys beginning in 2002 to bring awareness and build community ties within and between indigenous and non-indigenous communities. Jewell James carved the “Red Road to DC Totem Pole” (RR2DC) that made its way to East Shore on July 11th last year. It subsequently traveled through 26 states to Washington DC where it was gifted to the Biden administration.

Several East Shore members volunteered to help the Lummi hosts prepare for the arrival of four canoe families and land protectors as part of the “Gathering of the Eagles” (Esqalph etse Kwelengsen), a week-long healing canoe journey to the San Juan islands for indigenous communities, held prior to the Honoring Ceremony. We prepared and served food to several hundred guests over two days, helped secure arriving canoes, and five ESUC members attended the honoring potlatch as representatives of East Shore. On behalf of our congregation, we presented Mr. James with two enlarged, framed photographs showing two RR2DC stops—one at East Shore and the other at Pike Place Market. We raise our hands to Jewell James and the Lummi for their leadership in advocating for the Salish Sea, orcas and salmon, the Snake and Columbia rivers and all life in the Pacific NW and Turtle Island!

This latest totem pole created by Jewell James represents Tahlequah, the orca who carried her dead calf for 17 days for 1,000 miles. Our resident orcas face likely extinction due to starvation if the Lower Snake dams are not breached soon to revive the salmon runs on the Snake and Columbia Rivers on which they depend. This totem pole highlights how the health of the Salish sea depends on healthy river systems and is part of a current campaign to mobilize political support for breaching the dams. 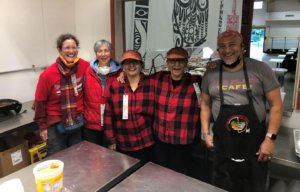 Carrie and Marilyn in the Wexliem Community kitchen with the cooks, Tina, Dori and George.