News from the Music Department: Choir in Covid 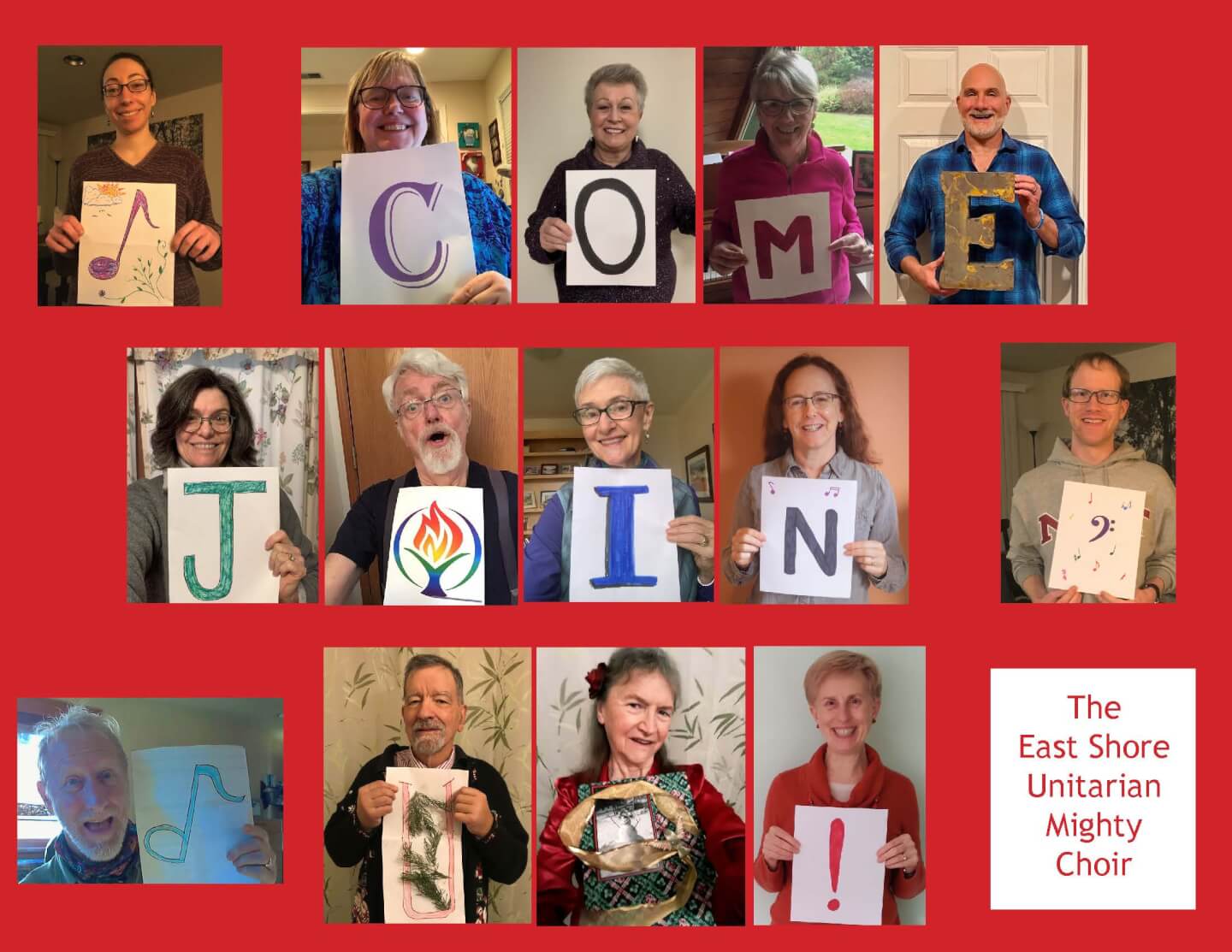 It has certainly has been an interesting time for musicians. When the pandemic hit and East Shore made the wise decision to close to in-person meetings, the staff and ministerial team went to work on how to best craft virtual services that would be engaging, uplifting, spiritually nourishing and connecting. The shape of the services has remained very similar, at least as far as what elements go into each section (welcome, chalice lighting, readings, sharing joys and sorrows, a sermon/homily, a sung benediction and a postlude) but the format changed quite a bit. Putting music together for live performance through live rehearsals is something I’d been doing for most of my professional life. But how does one create a sense of live music for a virtual context? How does one work with a choir in a virtual context? Is it even possible?

I had numerous conversations with choral directors across the country who were figuring out what is possible in a virtual musical setting and what is not. We all faced one common technical dilemma: something called ‘latency.’ In a virtual setting like Zoom there are countless variables that go into how sound is sent and delivered. The different types of devices being used (smart phone, tablet, laptop, desktop) in addition to the varying speed of internet connection and networks meant that there was no one unified signal on the receiving end. This is somewhat noticeable when people are having a virtual meeting where people are speaking and sharing graphics or videos; at best it’s just a bit annoying when someone’s voice comes in late, or there is a juddering sound, or the sound breaks up. But in a rehearsal, when people are trying to sing the same thing at the same time, the problem of latency creates nothing short of a chaos of sound. For this reason choral directors (as well as instrumental directors) have needed to have participants mute their mics in rehearsal, and take on faith that the participants are singing (or playing) beautifully in tune. This is why we ask participants to mute their mics during Sunday services. If everyone’s mic wasn’t muted the resultant sound would be painfully cacophonous – not quite the unifying, joyful sound we like to make when singing in person. This ‘everyone mutes their mic except the director’ isn’t a bad system for teaching music part by part – the director can sing or play a passage, and then ask the participants how they are doing, sometimes having individuals sing their parts one by one. But creating a virtual choir – one where it sounds like everyone is singing together – takes a bit of editing magic.

The virtual choir has been around for some time. Well-known choral composer and conductor Eric Whitacre has created international virtual choirs by having individual singers record parts that are collected and edited together. Since March, choruses across the world have taken their cue from Mr. Whitacre and have created virtual choirs of their own. My first experience with this was creating a virtual chorus video with Puget Soundworks, the inclusive singing community for which I am artistic director. We chose the song ‘One Voice’ by The Wailing Jennys, and had individual members record their parts (with audio and video) which we then stitched together to create the illusion that everyone was singing together. The recording process was novel-to-daunting for most of the singers – choristers are generally not used to singing a part all by itself, let alone recording themselves singing their part essentially as a solo. The editing was painstaking work, but after several weeks we created the video and put it onto YouTube. By September many choral groups across the country had created virtual choral videos using this same method. By September groups from around the world have put forth hundreds of virtual performance videos; performers from Broadway musicals to vocal have banded together virtually to recreate scenes and songs, vocal ensembles and enormous choirs alike have created these virtual choral videos. It has been wonderful to see the creativity and ingenuity that have gone into these creations, not to mention the adaptability of the creative human spirit when faced with a difficult situation. These virtual performances not only gave us a sense of the shared struggle, but it brought performers and groups into homes that have heretofore not seen or known such things even existed. People who have been unable to go to live shows or performances have seen some of the most creative forces in the world gather together to create songs and tell stories. While everyone I know is aching to be able to rehearse and perform together live again, it is incredibly life-affirming to see how music has continued to flourish.

The East Shore Mighty Choir has been meeting on Thursday evenings over Zoom since early March. These meetings are something like a rehearsal – we do vocal warmups and we sing through songs, part by part. These meetups are also an affirmation of community, a reminder that we still care about and love one another even if we can’t be in the same physical space. Those who participated in the Christmas Even 7:00 pm service at East Shore heard and saw the virtual choir videos we created specifically for that event. Each member had recorded their part and sent them to me and Craig Nelson, who helped edit the sound and created the Joy To the World video. Currently we are singing through some of our favorite UU hymns from both of our hymnals, and are working toward creating a virtual video of our birthday songs (we have two!) as well as the sung affirmation (‘From all who dwell below the skies…’) These are videos that will be part of services once they are edited and put together. But the main reason we get together on Thursday evenings is for the love of singing, and for the love of one another.

Anyone is welcome to join the East Shore Mighty (Virtual) Choir on Thursday nights. The Zoom meeting starts at 7:00 pm and we go to 8:00 pm or a little after (depending on our various check-ins at the end.) If you have been a choir member in the past and didn’t know we were meeting: welcome! If you have thought in the past, ‘Hey … I wonder if I could be in the choir’ – welcome! If you live miles away from East Shore – welcome! One of the benefits of being all-virtual these days is that distance simply doesn’t matter.

We do sincerely and earnestly look forward to when we can rehearse and sing together again in person. If we have learned only one thing in this time of lockdown it is that nothing will ever replace the joy of singing together. When that day comes there will be such love and joy resounding from the rafters that it will shake the foundation. But until that day happily – and safely – arrives, I am glad we have our virtual spaces to occupy. Love will survive. And what is music other than love, expressed in sound?

Puget Soundworks sings ‘One Voice’ by The Wailing Jennys