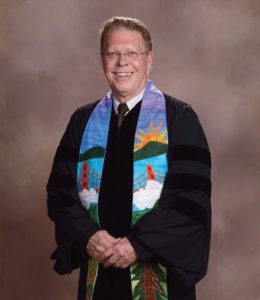 I recently served as Interim Minister of the Unitarian Universalist Church in Livermore, California where I’ve been helping the congregation tighten up their committee and organizational structures. I have also supported the membership in recasting their vision following the unexpected departure of their former deeply loved minister.

Before Livermore I served Pacific Unitarian Church in Rancho Palos Verdes, California. My work there focused on economic belt-tightening, simplifying structures, and re-energizing staff and lay leadership in the wake of steep and sudden human and financial losses for the church. Pastoral visitation and listening, plus a hands-on organizational presence produced a successful canvass and search — and a positive optimism not present in recent years.

I served as Interim Minister at the Unitarian Universalist Congregation in Fullerton from 2014-2016 I worked hard to nurture continuity and reassurance following the retirement of a twenty-two year, part-time minister who had been removed from UUA Fellowship. Attention was paid to one-on-one pastoring, creating and nurturing staff cohesion, and tightening up congregational systems and procedures. On the cusp of becoming a program-sized congregation, I helped UUCF update their bylaws, strengthen their financial position, establish small group ministry, and reestablish healthy denominational ties.

In 2013-2014 I served the UU Fellowship of Redwood City where my attention was focused on helping the church deal effectively following the retirement a dearly loved minister. Infrastructure and administrative concerns predominated.

From 2011-2013 I was Interim Senior Minister of the First Unitarian Universalist Society of San Francisco. As a former intern there I had grieved, along with many others, watching a 30+-year
-long series of knock-down-drag-out fights and less than-stellar ministries. I was drawn by the challenge unaware how truly challenging it would be. Facilitating healthy staff changes and restructuring the office required a lot of work; work that was met, in some cases, with fierce resistance. A unified Board of Trustees addressed and resolved troubling personnel matters. Meanwhile, under my leadership and with the Board’s continuing support, we restored and strengthened the Personnel Committee, standardized accounting procedures, strengthened RE, simplified the Order of Service and restored the Worship Associates program. Since my departure, the San Francisco congregation embraced my recommendation to covenant with a UUA-recommended Developmental Minister, becoming the first “flagship” UU congregation to revitalize themselves in this way.

In 2010-2011 I served as Interim Minister in Long Beach, helping reinvigorate a moribund Worship Associates program, reorganize the church office, and strengthen the Social Justice program. In Santa Monica, where I served the year before that, we increased the congregation’s financial health, simplified and streamlined Sunday worship services, strengthened interfaith outreach, and
rejuvenated the church’s mutual care network. From 2000-2009 I served the UU congregation in Santa Fe, N.M. The congregation grew in size, purchased five acres for a future building site,
quadrupled its Permanent Endowment, established strong Worship Associates and Pastoral Associates teams, and re-energized the Social Justice and Denominational Affairs committees. Church members were part of a coalition that helped abolish New Mexico’s death penalty and helped pass, in Santa Fe, the then highest minimum wage in America. We wrote and adopted a congregational
covenant, mission statement, and covenant of right relations. We instituted Lifespan Religious Education and nurtured covenant groups.

Previously I served as Interim Minister in Binghamton, N.Y., and before that for six years as Minister of East Suburban Unitarian Universalist Church in Pittsburgh, Pa. In Pittsburgh we grew numerically and financially and made significant steps towards acquiring the church’s first building. Meanwhile I worked as a Ministerial Consultant to two nearby UU fellowships; first in Morgantown,
W.V., and then in Indiana, Pa.

Throughout my ministry, I’ve been very active in community affairs, including AIDS Alliances, Hospital Chaplaincy Boards, the NAACP, various peace and interfaith groups, the Religious task Force on the Economy, and the Alliance for Progressive Action. I’ve also participated in direct person-to-person activities: stage managing the Mother’s Day Peace Rally, leading the Memorial Day Prayer
on the town square, blessing and helping install the new Postmaster, delivering the High School baccalaureate address, and even being emcee for a local pops concert. I’ve also been involved in GA programming, and as a primary sponsor of the ’96-’97 General Resolution, Working for a Just Economic Community. I have successfully written grant proposals to both the UU Funding Program and the Veatch Program at Shelter Rock, totaling over $200,000. In 1994, I was appointed by the UUA Board to an open position on the UU Funding Program, eventually Chairing the Fund for UU Social Responsibility. From 2004 through 2010, I served on the UUA’s West Regional Sub-Committee on Candidacy.

I believe that excellent Sunday worship services are at the heart of all healthy congregations. Consequently I invest a lot of my creative energies into that effort. My personal style is relaxed, focused, and professional. I am sixty-seven years old, partnered with Carol Allen, with a thirty-eight year-old daughter, Meredith, who lives in Australia with her husband, Dan, and two
small children. I had primary custody of Meredith throughout her youth. I am a sixth generation Unitarian Universalist, one of four siblings who attended the First Unitarian Church of Cleveland, Ohio. We remain a close family.

Before attending seminary, I worked in the US House of Representatives where I became active in the national Democratic Party. I have retained this interest. I love theater, being in nature and camping, writing, rollerblading, working out at the gym, baseball, history, reading, puttering around on boats, and sitting by the water’s edge. I loved being a dad and seeing my daughter grow up to be a loving and self confident young woman (and now mother). She’s a psychiatric social worker and an active member of the UU Fellowship in Brisbane, Queensland.

Finally, I experience the Unitarian Universalist ministry as an incredible honor and challenge and pleasure. I believe our UU movement is an extraordinary force for good in the world and I’m both honored and grateful to serve it.