Why I Support the 8th Principle 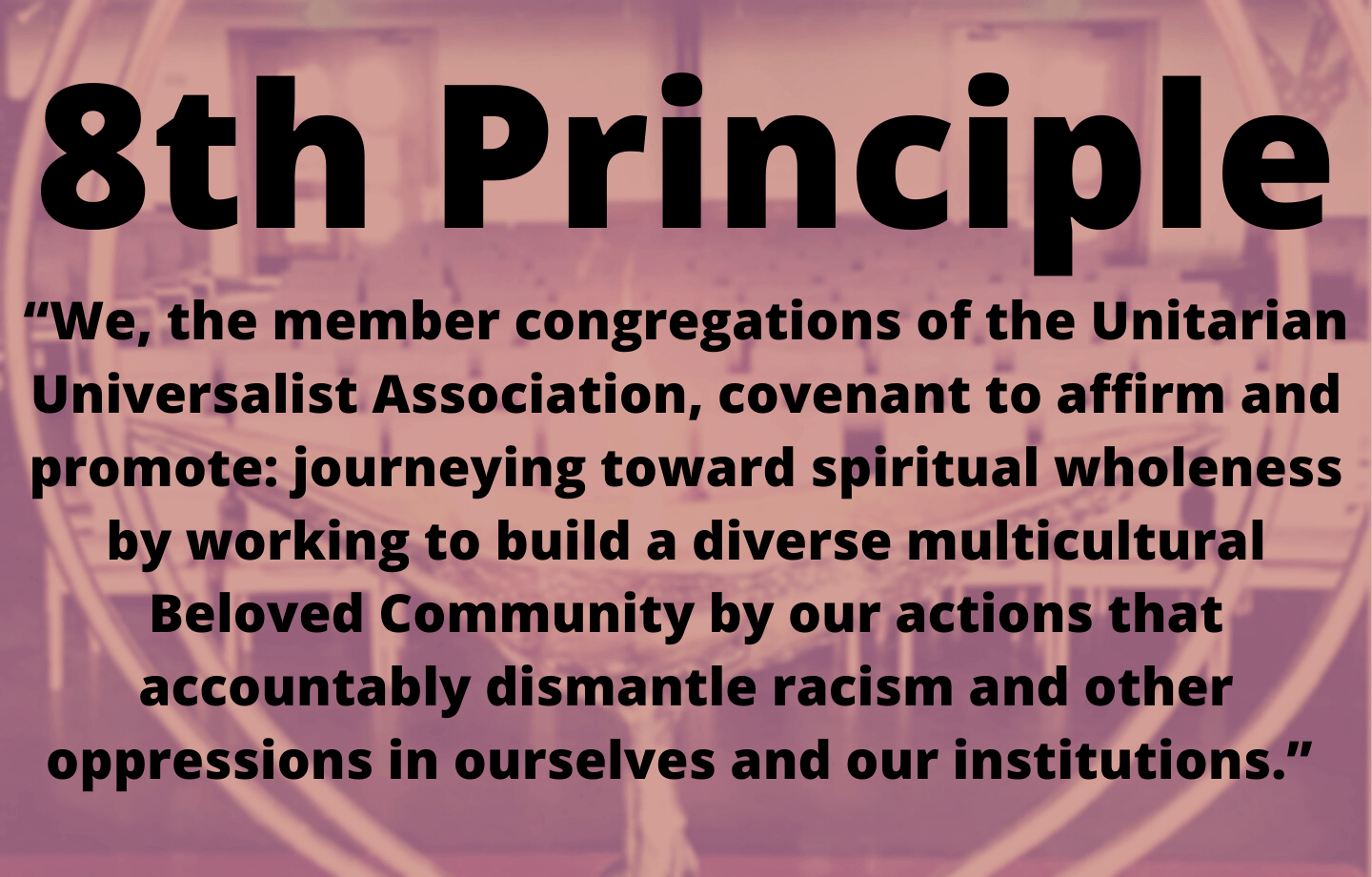 When I was 12 my brother went to Italy and an exchange student from Uganda came to be my big brother. 50 people in my town outraged my parents with a petition that he not come because he was expected to be black.  In college I was a counselor at a very diverse summer camp led by my first mentor, an African American HS teacher.  Five decades later I still have friends from then.  In the late 80s I became a UU so my kids would have some moral education, and three years later my brother became UUA President.  His college roommate, who took me to visit his English class at Harvard when I was 14, Bill Sinkford, succeeded my brother, and at GA 2019 in Spokane I watched appalled as Bill came into a  meeting in a wheelchair and was ignored by nearly all, although he was the immediate past president of the UUA. I served on the Board of Trustees of East Shore with Elaine Peresluha and Aisha Hauser and Jason Puracal, and watched many aggressions within our church, much well-intended systemic racism, go denied and unrecognized.  At that GA I met Paula Cole Jones and heard her lecture on the beloved community being a “community of communities” as a model going forward for us UUs, and then learned about her grassroots leadership of a movement to bring congregations to adopt the 8th Principle one by one to bring it from the people to the GA, rather than from the Board to the people.  Right strategy, right thing to do, and long overdue.  I signed up, this spring, with her private Facebook 8th Principle Learning Group.  You can, too!

We UUs ARE THE vanguard religion, out in front in the 1960s civil rights movement, and out in front for gay marriage, and we belong out in front on antiracism in full alliance with BLUU and our BIPOC brothers and sisters.  Dismantling racism is the only way forward for our democracy, in my opinion.

I retired last June, and expect to be around a long time.  I am committed to service as my personal route to meaning.  I’ve had enough personal hell through two divorces and recovery from alcoholism to last a lifetime. I want to see my congregation get off the dime of old, white, self-satisfaction and move out in front of the most important social movements of our time:  antiracism and the climate emergency.  The two go hand in hand, not in opposition, but it is harder by far to recruit whites to antiracism than to climate work.  In a nutshell, that’s it.  If we can’t embrace this, I don’t know why I belong to this congregation.