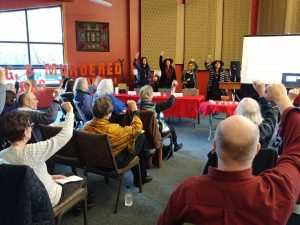 On March 4th, Women’s Perspective and Beloved Racial Justice sponsored a panel presentation that addressed human trafficking, especially the plight of missing and murdered indigenous women (MMIW). The panel included two indigenous women from Innovations Human Trafficking Collaborative, a nationally-known organization based in Olympia, and a woman from the Puyallup Tribe whose mother disappeared when she was a teenager.

The three panelists spoke to an audience of approximately 40 people about the many factors that contribute to why indigenous women are trafficked, disappeared, or murdered at significantly higher rates than the general population. They also wove in heartbreaking stories about their own lives. One woman told of her mother’s disappearance. It was a struggle to get the police to even take a report because they said crimes in Indian country were not in their jurisdiction. Another panelist talked about her families’ dysfunctional dynamic and how one of her family members sexually abused her at a very young age. The third woman spoke of the years she was trafficked and how she managed to regain her life and go on to work on behalf of indigenous women.

Among the various factors that contribute to an explanation of why native women are missing and murdered is the historic treatment of indigenous people by the U.S. government. They were stripped of their culture and language, and family systems were attacked. Children were torn from their families and forced into boarding schools where they were not allowed to speak their language or practice their culture. Multiple generations were cut off from their extended families and severely traumatized in this model. Additionally, as the US systematically took over the land, Native Americans were forced onto reservations. To maintain control, hundreds of “Forts” were established which housed armies of men, isolated from their families for long periods of time. In fact, every fort housed brothels. Native women were the easiest group to be forced by fraud and coercion to work in the brothels. 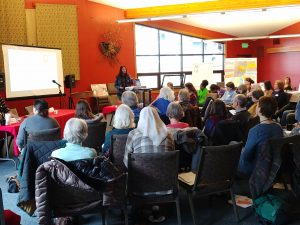 Factors such as these contribute to what is known as “intergenerational trauma” or “historical trauma.” The transmission of historical oppression has had negative consequences across generations on the health and well-being of indigenous people across the country. Organizations across the country and locally, such as Human Trafficking Collaborative and Missing and Murdered Indigenous Women, are working hard change this tragedy. Their activities include: