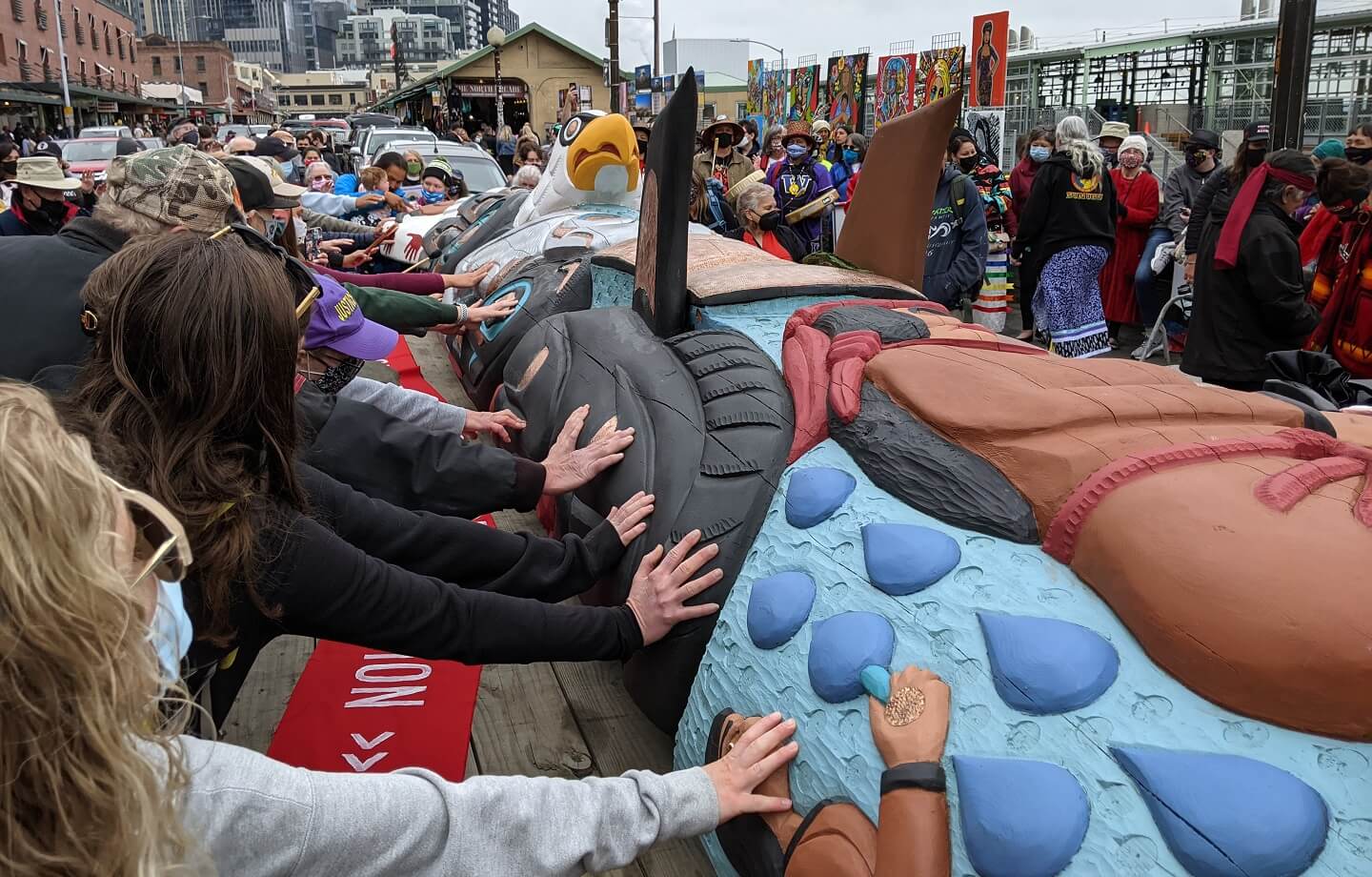 This year, as in years past, the Lummi Nation’s House of Tears Carvers led by Master Carver Jewell Praying Wolf James, is embarking on a “Totem Pole Journey” as a way of drawing attention to Native struggles to protect sacred places and waters threatened by dams, climate change, and resource extraction.

On July 14th, the Lummi will begin a national tour, transporting a newly carved Totem Pole across the country making multiple stops to promote the protection and restoration of sacred lands, landscapes and waterways.  These stops include  Nez Perce traditional lands, Bears Ears Monument; the Grand Canyon, Chaco Canyon, the Black Hills of South Dakota and where the Dakota Access Pipeline crosses the Missouri River.   The journey will end in Washington DC on July 29th when the Totem pole will be presented to the Smithsonian Institution and the Biden administration.

The 24 foot Totem Pole, carved from a 400 year old cedar, includes figures of salmon, a wolf, bear, and eagle-  symbols common to many tribes.  A grandmother figure prays for a native child held in a cage, torn from family at the Mexican-American border.  At the base of the Totem Pole is a river.  Through the Totem Pole Journey, the Lummi call on all of us to share responsibility for protecting the sacred lands, waters and rights of indigenous peoples.

Before heading on the 5,000 mile journey across America, the Lummi will have brought the Totem Pole to West Coast tribal communities and other sites.  They held ceremonies in Seattle (May 22nd) and Bellingham (May 24th) attended by several East Shore members. 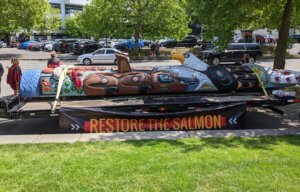 Speakers spoke of the violence perpetrated against native peoples in the past and in the present, noting in particular the ongoing issues of Missing and Murdered Indigenous Women.  The gathering honored the memory and family of John T. Williams, a native carver killed in 2010 by a police officer in Seattle near Pioneer Square.

The Lummi ask for our blessings and support on this historic Totem Pole Journey.

To help cover the cost of food, gas and lodging for the 6-15 person crew, please consider donating to this communal effort:  DONATE HERE!

Keep your eye out:  A June Zoom gathering is being planned about the history and significance of the Totem Pole journeys through East Shore.