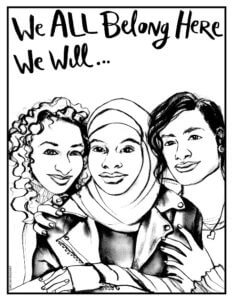 A few weeks ago, a controversy erupted among Unitarian Universalists about how institutional racism is manifesting in our own system. This controversy has resulted in drastic and fast moving changes including the President of the Association stepping down, along with two other senior staff members. The UUA Board of Trustees was inundated with letters from lay leaders, religious educators, congregants, and ordained clergy expressing mostly support for the Board to hold the Association accountable for its hiring practices.

What has emerged from this controversy is a desire to understand what it means to live in a society that lifts up one group as more valued than any other. A group of religious educators gathered to talk about how to create a structured opportunity for our congregations to expand the dialogue and their learning in this area. The result was the call for the UU White Supremacy Teach In. The words “White Supremacy” have caused unease, discomfort and in some cases, outright anger almost exclusively from white people. Those of us who support the Teach In have been accused of calling UUs “white supremacists.”  While I can empathize with the confusion, the religious educators who have been working on this are asking that people take the time to listen to what is being asked and not engage from a place of defensiveness. No one called Unitarian Universalists, “white supremacists,” what has been lifted up is the ways in which the system of “White Supremacy” has created the conditions that now exist in our denomination and country.  The purpose of the Teach In, is just that, an opportunity for folks to Teach and for folks to Learn about the water in which we all swim, the water of white supremacy.

I will quote a white UU Minister named Rev. Krista Taves, who wrote on Facebook:

I get why there is so much pushback about using the term “white supremacy” to describe the culture in Unitarian Universalist institutions. We have been trained to see white supremacy as an overt expression of racism, replete with burning crosses, white hoods, confederate flags, lynchings and angry white people in black and white footage shouting racist epithets at black children trying to enter white schools. This allows liberal whites to distance themselves from racism and believe that we aren’t part of it. At least we aren’t calling people names, threatening their lives, or muttering under our breath.

I admit my stomach turned when I first heard the term “white supremacy” used to describe the culture of Unitarian Universalism and our institutions. But I’ve reconsidered that response.
White supremacy is way bigger than the way we’ve been trained to understand it. White supremacy is a way of thinking that devalues the experiences, insights, and lived reality of people of color. The consequences of this thinking goes beyond an abstract state of mind and has the real life impact of denying people of color a real voice with real power. Rarely is this culture explicit or even conscious in liberal white communities. It is implicit and unconscious. This is why I totally believe that those responsible for the latest hires are fully convinced they did nothing wrong and were not acting out of racial bias. However they were unconsciously acting out of racial bias.

Naming this as an act of white supremacy is pretty scary but it is the right thing to do. It sure has shocked a lot of whites into paying attention. Calling what happened “implicit bias” gives it a pass. It makes it softer than what it actually is, the devaluing of people of color and the denial of authority and power to people of color.

We are being very brave to call it what it is. In fact, it sets us apart from most liberal institutions which are in complete denial about the power of racism to shape their decisions and their processes. There is not one institution in this country that is not shaped by white supremacy, and that includes institutions run by people of color. We have all been indoctrinated into white supremacy thinking. Therefore there is no reason to feel shame or fear. It is not your fault. You are not stained. We are not irredeemable. Our Universalist heritage says that no one is left behind. Let’s anchor in that promise. I implore you to resist your urge to run away or to distance yourself from the term. Stay with us. Bend into the task at hand. Dare to be vulnerable.

Are there people who will stop giving financially because we are going down this path? You better believe it. They already are. Accept their decision and move on. Are there white people who will leave our churches over this? You bet. Accept their choice and trust that they will be held somewhere else. Are there people who will choose not to visit UU churches because of this difficult road we are walking? You bet. Not everyone is up to the task at hand. Unitarian Universalism was never for the faint of heart and that is as true today as it has been throughout our history.

But if you want to journey into wholeness, if you want to live into the transformative pain and possibility of this one incredible life you are living, if you want to experience a community that doesn’t shy away from calling truth to power, then Unitarian Universalism is for you and I welcome you into this time, this place, and this faith. This is an incredible opportunity we have and I want people like you sitting at the table of compassion and justice. #faithoverfear

This Teach In is an opportunity for Unitarian Universalism to live into the values that we espouse, those of the free and responsible search for truth and meaning and working for social justice in our hurting world. Join us on May 7.

For information and resources on the Teach In visit http://www.blacklivesuu.com/teachin/